Late on November 28, 2016, major news outlets like NYT and WSJ broke articles that the Trump administration is choosing Tom Price MD, a surgeon and senator from Georgia, as Secretary of Health & Human Services. 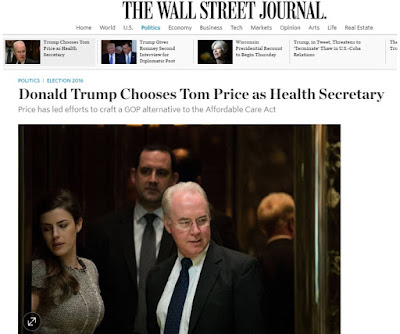 Price, who has served six terms in the House, was an early and consistent supporter of Campaign Trump.

For links to sources on Republican health policies, here.


If President-elect Donald J. Trump wanted a cabinet secretary who could help him dismantle and replace President Obama’s health care law, he could not have found anyone more prepared than Representative Tom Price, who has been studying how to accomplish that goal for more than six years....

While some Republicans have attacked the Affordable Care Act without proposing an alternative, Mr. Price has introduced bills offering a detailed, comprehensive replacement plan in every Congress since 2009, when Democrats started work on the legislation. Many of his ideas are included in the “Better Way” agenda issued several months ago by House Republicans.


....The House Republicans have had a far more detailed plan than Trump for reconfiguring the nation’s health care system along conservative lines. Earlier this year, Price suggested that a Trump presidency would advance the House GOP health care agenda. “When I talk to people who work closely with Trump, what they tell me is that behind closed doors he’s one of the best listeners they’ve ever worked for or with in their life,” Price said in an interview in the spring. “Which is kind of counterintuitive given what some of his public persona is.”