On November 13, 2016, the Wall Street Journal published an op-ed by Trevi Troy and Lanhee Chen deriding the idea that the GOP had pointlessly passed bills to appeal the Affordable Care Act without having a replacement plan.  Troy is at the American Health Policy Institute (here) and Chen is at the Hoover Institute (his home page and article links here).  See their WSJ op ed here.  They argue that collectively, Republicans have a lot of good ideas waiting to be marshalled together.

For further background, there are a number of key Republican Health Policy references from the past year: 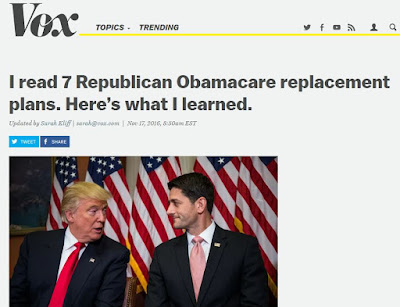 Restaffing CMS at the Top

Of the 4000 political appointees to be installed under a Trump administration, an informal estimate suggests about 10 are at CMS.   These include the highest position, Administrator, which must be confirmed by the Senate for both FDA and CMS.   Below that are several positions that are political appointees.   Below that are a few positions that are sometimes called "quasi political" because they are subject to reappointment and change, but may be low enough visibility that the previous incumbent continues in them.   More after the break.

Some of the changing positions include or likely include:

Chief Medical Officer
Head of Center for Medicare and Medicaid Innovation (CMMI)
Currently both headed by Dr Patrick Conway, who is also a Deputy Administrator

A November 10 article in New York Times by Shear and Harris remarked, "The Center for Medicare and Medicaid Innovation and the Patient-Centered Outcomes Research Institute, both deeply unpopular with congressional Republicans, will probably be eliminated."

Head of Center for Clinical Standards and Quality

The classic book on the changeover in America's executive branch, where a very thin layer of senior executives are replaced over a army of administrative policymakers who are non political career government employees, is Government of Strangers by Hugh Heclo, 1977.    This remains relevant reading and not surprisingly, it is currently sold out at Amazon.com    (There's no ebook.)   Amazon here, Brookings Institute here, short online summary here.

A November 2016 blog does not cite Heclo by name but tees off  from Heclo's book title --  here.  In "Trump's Washington: A Government of Strangers," blog author Llewellyn King writes,


[After Trump's victory,] the conservative think tanks in Washington stand ready to heed the call, and maybe to provoke it, if they have an in. The think tanks are sounding boards for political ideas, like what to do about health care, foreign policy and trade, but they also represent something of a government in exile.

When a party is defeated, the ranks of the think tanks sympathetic to that party swell. Expect to see the Brookings Institution, the Progressive Policy Institute, the Economic Policy Institute and the New America Foundation find places for those leaving the Obama Administration.

Likewise, the American Enterprise Institute, the Heritage Foundation, the Center for Strategic and International Studies and the newer Foreign Policy Initiative will be ready to disgorge their best to serve in government.

It is a changing of the guard that takes place with each election that results in a change of party.

Tevi Troy: Dems and Fake News
Arguing that misleading and damaging rhetoric is not limited to any one shrill stakeholder group, current waves of disinformation and "fake news," in his book "US Health Policy: An Insider's Perspective"  Republican health expert Tevi Troy argues that in various instances, Democrats misleadingly smeared Republicans as "wanting to kill Medicare" or "destroy Medicare" in print or commercials in the past decade, in some cases, contributing to the politician's political demise.  Troy's book is a collection of his journal articles and op-eds, and is available from Amazon here.

Ryan and Medicare Advantage Reboot
On November 24, as mentioned earlier, the New York Times ran a feature article by Robert Pear that "a battle to change Medicare is brewing."   This reflects long-standing desires in some circles to drop Medicare as a complex government burocracy and replace it with a simpler voucher system.   At first, one might ask how this is different that current Medicare Advantage, which captures about 30% of enrollees already.   Essentially, in Medicare Advantage, CMS holds a "voucher" (so to speak) for $10,000 of healthcare, and the beneficiary picks his health plan, and CMS pays the $10,000 per year to the health plan.    (The details get very complex quickly; see here.)  Even under radical Ryanesque revisions, the beneficiary is never going to "hold a check" for his $10,000 of insurance; it will always be transmitted under some conditions to a regulated health plan.  As Pear explains, under a more radical commercialized Medicare reform, if free for service Medicare continues to exist, it too would have a capped annual voucher value so it would compete on a level playing field with commercial plans.  And today's Medicare Advantage plans are very tightly reigned in, if they save on health costs, they give the money back to beneficiaries or CMS.   On the other hand, an unrestrained and minimally regulated insurance that makes profit at breakneck speeds by "denying grandma chemotherapy" or denying her a hip replacment might prove unworkable.   And many medicare beneficiaries are over 80, even over 90, not typical info-happy consumers in the marketplace.

Market-based fixes to health care costs generally ignore the fact that a huge proportion of costs are held by a small group of patients.   "Shopping" and "high deductible plans" will get some healthy people down from 4 visits a year to 2 or 3, or steer them for a $1500 MRI scan to a $999 MRI scan.  See Uwe Reinhardt's article, "Republicans can repeal Obamacare...They can't repeal the logic of health insurance," at Vox, here.  The top 10% use 65% of health care, and the top 5% use half of health care.   Accordingly, actuarially competitive premiums would be very, very low for half the population, and skyrocket for 5-10% of the population who are actually very, very sick.

The increasingly interesting website MedCityNews brings out two essays on costs and productivity and innovation.   The first, by Dr. Frank Cockerill, former head of Mayo Clinic, asks about real reforms based on telehealth (here).  The second, by Dr. Jack Stockert, talks about healthcare productivity in decline despite technical and EHR innovation (here).  Stockert is a McKinsey-trained physician who also worked at WHO.