Brief Blog: Cancer, Emperor of All Maladies at PBS

"The Emperor of All Maladies," the 600-page 2010 book on cancer by Dr. Siddhartha Mukherjee, was brought to the screen as a four-part, seven-hour documentary last year.

The PBS homepage is here.  As of November 2016, it still streams for free online.  The Wikipedia page for the film is here.   It's directed by Barak Goodman and produced by Ken Burns.  It was narrated by actor Edward Hermann, who died of cancer before the film's release.

Even for those who work in oncology, or might have read the book, the film brings to life a wide range of topics in cancer - from the pioneering efforts to introduce toxic chemotherapy in leukemia in the 1940s and 1950s, to the recent discoveries of genomics and targeted therapies.  But the palette is broad, and includes the patient and family view, the special issues of pediatric oncology, the important role of prevention, the sociopolitical origins of Nixon's War on Cancer, the role of hospice, and issues of economics. 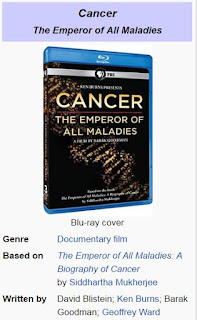 Also available on DVD, Amazon pay-for-download, and other formats.