Coming out of the Thanksgiving holiday, many news reports say that the 21st Century Cures Bill, under discussing throughout 2015 and slowed down during 2016, is likely to move forward was passed by the House on November 30 (392-26), and was passed by the Senate on December 7 (94-5). It was signed by President Obama on December 13, 2016. 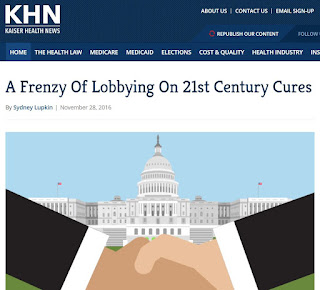 
The 44-page legislative summary PDF shows internal data as being authored on Friday, 11/25, by House staffer Carly McWilliams, making it pretty up to date, as least as of 11/25. See also a House press release on 11/26, here, a joint announcement by E&C Chairman Fred Upton and SFC Chairman Lamar Alexander.

One of the longstanding issues is that 21CC was barreling ahead with programs ($4.8B for NIH Precision Medicine Initiative and other projects including translational medicine; $500M for FDA to move faster but with same quality standards, etc.), but the legislation lacked a matching laundry list of "pay-fors."  One option has been "sale of oil from the Strategic Petroleum Reserve" - a 2015 estimate was that  $9.3B of federal oil sales could pay for 21CC initiatives.  As of November 2016,  STAT lists the bill's cost as $6.3B.

There are many miscellaneous line items, e.g. requiring HHS to set up a task force on lactating women and a requirement for NIH to have plans to include minorities in clinical trials, which is already a longstanding goal.   Some of the other items could vary from window dressing to impactful depending on agency response; e.g. a requirement for FDA to hold a meeting about alternative trial designs (something it already does at intervals).   The cap on humanitarian devices would be raised from 4000/year to 8000/year and a "breakthrough device" category would parallel the existing "breakthrough drug" category.

One recurring concern of opponents is that 21CC would accelerate drug approvals by lowering quality standards or heightening risk.   However, read closely, the bill requires "meetings" on topics or "requires FDA to consider" factors, but does not rewrite actual approval standards for safety or effectiveness.   (More on real-world evidence, a 2016 bipartisan report, here, a Duke white paper, here, a Brookings report here.)

Section 4010 would "increase transparency around local Medicare coverage policies."  For example, for each new LCD there would be a link to "response to comments" and "summary of evidence that was considered," both of which can be done now in variably perfunctory or helpful ways, depending on the contractor.  At Section 4011, the bill would also create a Medicare "pharmaceutical and technology ombudsman" which doesn't sound that different from the pretty sleepy, already-existing "Council for Technology and Innovation" at CMS (here), created by Section 942 of the MMA in 2003, thirteen years ago.

Kaiser Health News notes that "the Cures Act garnered more lobbying activity than any of the more than 11,000 bills proposed in the 114th Congress."