We read something about the missing value of "transparent pricing" almost daily in American health care.

Archives of Pathology and Laboratory Medicine just published a historical review of changes in the pathology profession and industry in the 1920s (by James Wright. University of Calgary; here and here.  This epublication appears to be open access, at least this week.)

One of the dramas of the 1920s was that some commercial laboratories were openly advertising their prices, and professional pathologists/physicians felt this was a violation of ethics codes "as if tests were commodities" since physicians ought not advertise prics.   A screenshot below.  As Wright describes, there were actually several full cycles of debate over the relative pro's and con's of advertising laboratory prices in JAMA and other medical journals (advertising might prevent the unscrupulous from overcharging [other] physicians.)

I don't assert any larger parallel or irony, but it's interesting in a coincidental way that transparent lab pricing was a big policy issue of the 1920s, and also lives on as a highlight issue for Theranos eighty years later in 2015/2016. 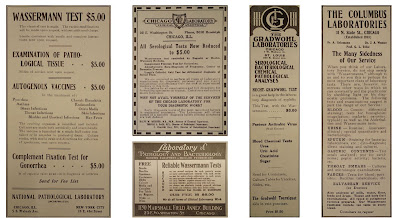 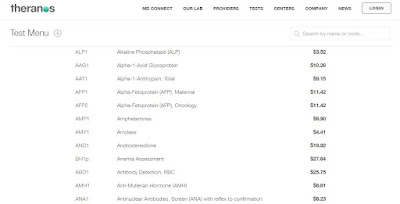