Approach the end of 2015, we can turn to 2016 by taking a look at a fascinating article that appeared a few months ago.

Larry Kricka, professor of pathology and laboratory medicine at Penn (here), is first author of four on the review and opinion article, "The Future of Laboratory Medicine: A 2014 Perspective," which appeared as an Invited Critical Review in Clinical Chimica Acta 438:284-303.   It is online (subscription or article purchase) here.

Kricka opens by citing a 1920 prediction that someday, there might be "as many as two lab workers" at major hospitals (here).


A summary from the review's introductory section is here:

An interesting starting point is the Inaugural lecture, titled “A view from a bridge,” given in 1969 by Tom Whitehead, the first Chair of Clinical Chemistry at the University of Birmingham [16]. He identifies five eras of clinical chemistry: The complicated era from 1920 to 1940 when testing was manual and laborious, the simplified era from 1940
to early 1950s when test procedures were simplified, the crisis era in the late 1950s when the test workload doubled every 4–5 years, the sophisticated era in the late 1960s based on new automation and computing technology, and the profile era in the 1970s when tests were bundled together as profiles in order to improve laboratory efficiency and to detect biochemical abnormalities that would not have been detected by clinical examination (Table 3).  He also points to the continuing importance of computers and automation, in addition to the emergence of preventative medicine and pharmacogenetics.

There is merit in each of these predictions. For example, profiling has re-emerged in clinical testing in the form of protein, tissue and nucleic acid arrays (e.g., cytokine profiles, array comparative genomic hybridization analysis) [49–52]. Computers and automation have played an increasingly important role in improving the efficiency and effectiveness of testing. More recently, pharmacogenetics, popularized by the slogan “right patient, right drug, right time” [53], has moved into mainstream testing (e.g., CYP2C9 for warfarin dosing) [54]. Since 1969, there have been many predictions and views of the future development of laboratory medicine and its sub-specialties. A summary of these predictions is provided in Table 1 [12–48]. A number of common themes and buzz-words can be identified in the prognostications such as nanotechnology, biosensors, microchips, genomics, and proteomics. These topics, together with the more specific predictions, are discussed in greater detail below. 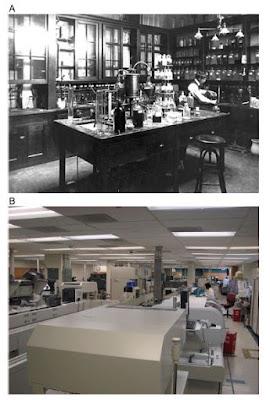 Lab becomes lab on a chip: 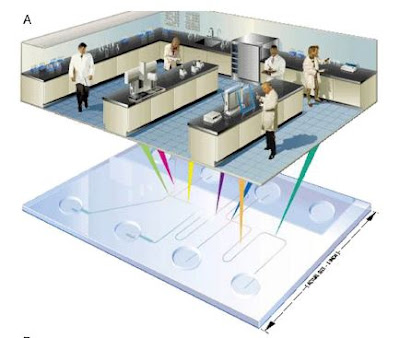 ____
For an entertaining deep dive into the history of pathology in the 1920s, here.
For a 2012 essay by Quest's Charles Strom on changing trends in pathology, here.