In March, CMS opened a 60 day comment period on a nationwide drug pricing demonstration, which illustrated the extremely wide-ranging authority granted to the Center for Medicare and Medicaid Innovation (CMMI) under 2010 legislation.   (The CMMI can waive any Medicare law it chooses to, based on a small clause that received little attention at the time.)

On May 17, 2016, the House Energy & Commerce Committee will hold a hearing on the demo proposal.  The House website is here; proposed legislation to stop the implementation of the demo is here; and a House background document on the demo is here.   The hearing will start at 10 ET and will be webcast.

In the backgrounder, House staff write:


...While these concerns are numerous, the mere scope and design of this proposal,including waiving several parts of statute, its nationwide application, the untested application of value based purchasing mechanisms, and the dramatic reduction in reimbursement have led many to call for a withdrawal of the proposed rule.

Some on the Hill support the CMMI demo (as long as implementation is cautious to concerns); see a 4 page May 16 letter to HHS from Sens. Warren, Franken, and nine others; here. 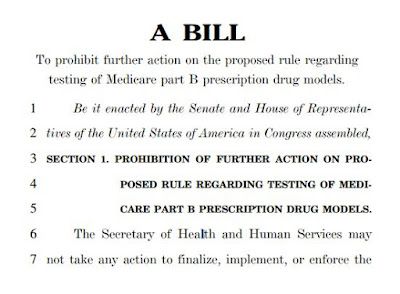 A coalition against the CMMI proposal has a website, StopCMSCuts.   My original and updated blog on the proposal, here.