The Mess That Is MACRA? Two Views in the Same Week

In Spring 2015, Congress passed Medicare Part B payment reform - the SGR fix or Doc Fix - in a bill called MACRA.   In addition to turning off the accounting Tower of Babel that had been the Sustainable Growth Rate formula, the MACRA legislation creating a new...well, Tower of Babel which is a very complex physician reward and penalty system.   The maximum rewards and penalties are much higher than under prior piecemeal reward systems like "PQRS" and "EHR Meaningful Use."  Policymaking to implement these systems is still underway at CMS.

This week, two interesting and contrasting reviews of MACRA appear. The first one, at Health Affairs and written by staff at Urban Institute and supported by Robert Wood Johnson - here.  It has the generic title, "Medicare's New Physician Payment System."  Available as a long blog or a well-illustrated 7p PDF.

The second is penned by attorney and CMS expert Kip Sullivan and appears at THCB, The Health Care Blog.  It has the more provocative title, "The Mess That Is MACRA."   Find it here.  Sullivan writes,  "MACRA is so devoid of details about each compartment that it is impossible to predict anything" and has a section titled, "Sandcastles on top of sand castles." 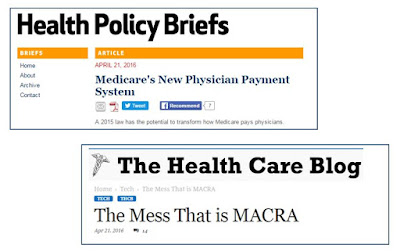 For a September 2015 post by Medicare's senior management on MACRA rulemaking, see here.

In March 2016, the House held a hearing on MACRA implementation, here for a news post at American College of Radiology (ACR) and here for archived documents and video at House E&C.