According to an April 14, 2016, column at Drug Channels, based on a Milliman report commissioned by the Community Oncology Alliance:


Links after the break.

Different stakeholders will use this data pro-and-con the currently proposed CMMI nationwide program to test new payment models for Part B drugs (here).   Argument against the demo: We're already losing the physician office local access channel, don't hasten that decline.  Argument for the demo: The market is already moving away from buy-and-bill, and doing so for years, so we might as well accelerate it. 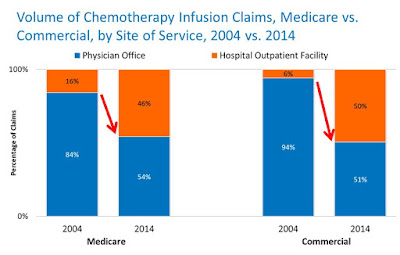