The book was released in September 2022 and is available in paper, hardcover, and ebook from Amazon.

FORCE initially focused on individuals positive for BRCA mutations, but expanded its focus to multiple hereditary cancers and genes in 2020.

Find the FORCE webpage for the book's release here: 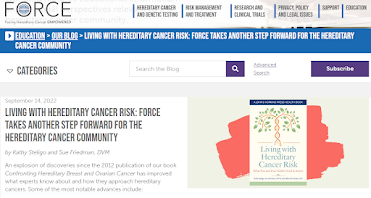 Clipping from FORCE web page below:

An explosion of discoveries since the 2012 publication of our book Confronting Hereditary Breast and Ovarian Cancer has improved what experts know about and how they approach hereditary cancers. Some of the most notable advances include:

In recognition of these changes, FORCE expanded our mission in October 2020 from focusing solely on people with inherited BRCA mutations to also serve people with Lynch syndrome and those with a mutation in lesser-known genes including ATM, PALB2, BRIP1, CHEK2 and others that also raise the risk for one or more cancers.

With so many important changes in the world of hereditary cancer, we needed a new guide that reflects our commitment to providing accurate, up-to-date information and resources to the expanded high-risk community. Living with Hereditary Cancer Risk: What You and Your Family Need to Know, does just that.