Update: The Lab Industry, Through the Lens of Tier 2 Genetic Codes

Key point: You can look at labs named in public website DOJ documents, and in a few moments, see exactly what codes and claims they were paid for in 2020 by Medicare Part B.

What Are Tier 2 Codes?

These codes were not initially priced by CMS, and payments as late as 2017 were only around $72M, of which $9M or 13% of payments were for 81408, the highest code which pointed to full sequencing of rare genes.  (They were rare genes, hence, that's why they weren't Tier 1 codes). 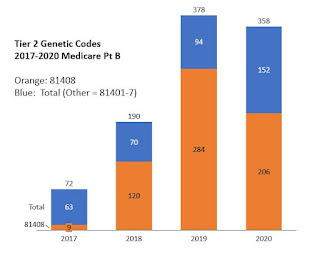 In July, Medicare released detailed Part B payment data for every lab (or doctor) and CPT code, for CY2020.   You can get all the data from CMS via easy to use public web resources here.

Relative to all US genetic payments, the pattern for Tier 2 payments is unusually, with 56% of payments going to 1 state, Texas.

The table below shows a lab in California, a MolDx state, getting $26M for Tier 2 codes, but I understand from other research that MOLDX generally doesn't pay for Tier 2 codes, or very little, and so this CA listing may be an anomaly related to an NPI or Tax ID issue.  If we stipulate that the CA listing is some kind of anomaly (doesn't reflect Noridian claims), then all the Tier 2 payments, practically, were in Novitas and FCSO states. 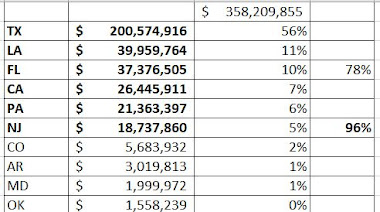 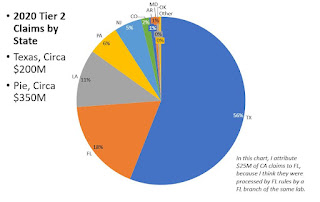 DISTRIBUTIONS OF LABS FOR EACH PLA CODE

You can also take the largest PLA code, 81408, and see how its 2020 utilization was distributed among individual Medicare labs.  (The original CMS data, linked above, includes lab names, street addresses, etc).

I leave as an exercise for the reader.  The DOJ has a long webpage of cases it is pursuing related to telemedicine orders for genetic tests (in some cases DME equipment).  Here:

If you look through the DOJ documents for named labs, and then, refer back to the public CMS claims database I've been talking about, you can see in a few seconds the paid claims billing pattern for each lab that is named and cited by the DOJ.  It's public, and literally at one's fingertips.