In 2020, MolDx brought out a groundbreaking new LCD for Pharmacogenetics, which tied coverage to CPIC and FDA recommendations, updating coverage in sync with the updates to those coverage resources.   (This summer, 2022, Novitas has offered a draft LCD that would tie or sync its cancer genomic coverage to external resources like NCCN.)

While the body of the LCD focuses on gene:drug pairs endorsed by CPIC and FDA.  However, the billing article also has a section called "Multi Drug Panels."  These list 5 tests that are covered EITHER for (a) depression, (b) other psych disorders, or (c) both.

The current table of coverage for psych gene panels reads like this:

What about pricing?   Go to the DEX online database (email registration required) and you can look up each test and the price MolDx assigns it.  Genesight pegs in at $1568 currently.
But Wait, There's More
Oddity #1
If you track Genesight, you'll find two entries in the DEX database.  The first entry for Genesight is entitled Genesight Psychotropic, and it describes the Genesight test in detail, but has a flag, "Not Covered" under DEX.    The next entry after that is Genesight Psychotropic Multi Gene, which is stated as "covered" for $1568.   I believe that MolDx current management philosophy viewed the "single test" for Genesight as not covered (hence the term: Not Covered), but if the test is defined differently as a multi-gene test, with reporting criteria that match those required by the LCD, then it IS covered. 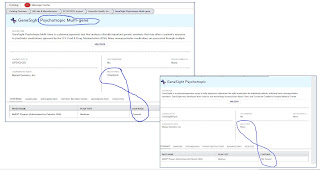 GeneSight Coding is Changing
Last year, AMA CPT introduced a new coding for 6 or more PGx genes, a code which CMS is pricing this summer and which will be effective 1/1/2022.   Right now, the expert panel recommendation is to gapfill the test, although crosswalk alternatives are available.  Most priced PLA codes for PGX gene panels have been a lot more than 6 genes.
Myriad now has a PLA code for its Genesight test, and as of now, recommendations are to crosswalk it to an existing PGX gene panel of about the same size, priced around $1300.  It's code 0345U, effective October 1 (CMS price to be effective January 1).  The crosswalk proposal is to 0175U, Genomind PGX Express, which is also 15 genes, like Genesight.  0175U is $1336.