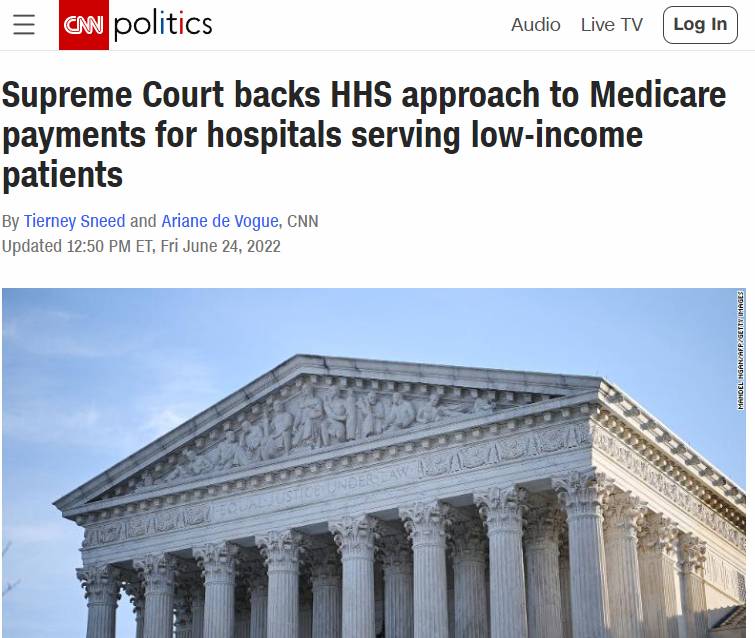 We often think of SCOTUS decisions has having major moral or political debates at risk (gun rights, inter-racial marriage).   But many cases hinge on what a term means, or whether two terms are synonyms, or whether an adjective modifies one word or another.

Such a syntactical decision was handed down June 24, 2022, as  Becerra v Empire Health.  It has to do with the way Medicare "disproportionate share" extra dollars are divided up, and in particular, how the Medicare patients and days are accounted for.   Empire Health thought the statute requires hospitals to get a better deal, but SCOTUS decides the current CMS regulations are correct and no change is warranted.

It's interesting for two reasons:

First, the 5-4 decision split the conservative bench.  The dissent, beginning on page 24 of 27, is written by Kavanaugh with Roberts, Alito, and Gorsuch joining him.   (In short, a lot of conservatives dissented, and would have taken a position helpful to hospitals.)

The majority opinion comes from Kagan and Breyer and Sotomayor, but was joined by both Thomas and Barrett as well.

Second, the dissent is pretty fun to read, once you know the basic issue in the case.