Diagnostics providers working in the MolDx regions have to track three MolDx-related websites.   Palmetto GBA, the actual MAC, holds the LCD policies and associated billing articles.   The MolDx website has many required-reading articles, rules, and forms for submission for pricing and coverage.   Meanwhile, a third website (owned by Palmetto) is the DEX Diagnostics Exchange where you can track and apply for Z codes.

There's a new announcement of note for the Z-code system.  Several months ago, MolDx announced that United Healthcare Medicare Advantage plans would require Z-identifiers (Z-codes) on their Medicare claims.   (Previously, the codes were only required for fee-for-service claims, that is, those claims going directly to a Part B Medicare MAC).

In a new announcement, dated December 30, 2021, MolDx states that more Medicare Advantage plans are going to require Z-codes and that labs should apply for Z-codes promptly to meet a March 1, 2022 deadline (less than 60 days).

Here are some links: 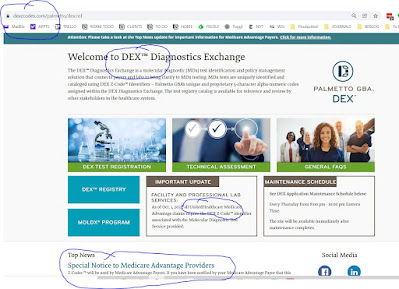 Here are the codes on which the MolDx MA plans require immediate (March 2022) Z-coding:

Medicare Advantage = Very Large
It's huge.  In 2021, more than 26M people were enrolled in Medicare Advantage, approach half (42%) of the Medicare population.  Data here.
Medicare Advantage Denial Rates and Rationales - a 2022 Paper
In the January 2022 issue of Health Affairs, Schwartz et al. study the rate of denials in Medicare Advantage, using Aetna data (most authors from CVS which acquired Aetna in November 2018).  Denial rates were only about 1% and 85% of Medicare Advantage denials were rooted in Medicare fee for service policies.  (Aetna can deny additional claims, when there is no Medicare policy to the contrary and when the service is deemed not beneficial by Aetna).   Here.
Of additional interest, Exhibit 2 in Schwartz et al. shows that 80% of denials were due to "experimental" or "no proven efficacy" while 10% were denied due to lack of medical records.  Most of the remaining 10% were denied relative to some primary denial (e.g. if a surgery fee is not necessary, the anesthesia fee is not necessary).

I believe for a long time MolDx carefully referred to "Z-identifiers" rather than Z-codes.  However, the term "Z-code" was common spoken language.  I notice the new website currently just refers directly to "Z-codes," and uses the TM symbol when it does.  Denial rates were incrementally higher in 2019 than 2014.

At the November 2021 annual CCLA meeting (California Clinical Lab Association), Dr. Bien-Willner, the program director of MolDx, noted that Palmetto has established a separate working entity, called IMPRES, of which he is the Director, for health plan contracting of its informatics solutions. 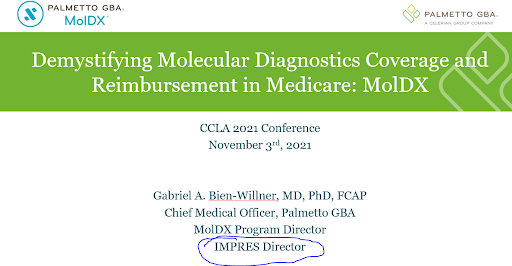