CMS released a decision to delay the MCIT rule until December 15.

The agency provided several pages of discussion of pro's and con's regarding MCIT, based on public comment solicited March 15-April 15.

All CMS is legally doing is delaying the rule in the form it was written in January.  Since CMS also seems to foresee multiple problems with the existing rule, it's very unlikely (or impossible) that CMS will simply implement the existing, suspended rule on December 15.  Sometime on or before December 15 CMS may revisit with "new rules."

Below, blog as written on Friday morning, May 14.

Last August, the Trump administration proposed a requirement that Medicare cover any new FDA breakthrough pathway device for four years.  The rule was finalized in mid January, but in mid March, the Biden administration put it on a 60 day hold for further review, and potentially, new decision-making.  See here.  CMS opened a new comment period that ran from March 15 to April 15.

The 60-day hold is about up today.  Look for further news from the Biden administration, possibly at the end of Friday May 14 (after 4 pm ET) or Monday May 17.

On May 10, and regarding a different CMS topic, the Biden CMS showed it is capability of turning on a dime and reversing even pretty major Trump CMS decisions.   Under the prior administration, and only last summer, CMS announced it was ditching longstanding complex charge-based rules to set the relative values of hospital DRGs.  Instead, as early as 2024, CMS would use relative DRGs related to commercial payer rates.   That was a BIG change.

Nope, that was then, this is now.  See 86 Fed Reg 25527, May 10.   "After further consideration of the many contract arrangements hospitals use to negotiate rates with Medicare Advantage payors, we are proposing to repeal...the market based DRG relative weight methodology."  Presto - done.  Adding,  "Comments received...provided questions and requested we delay or repeal the policy." 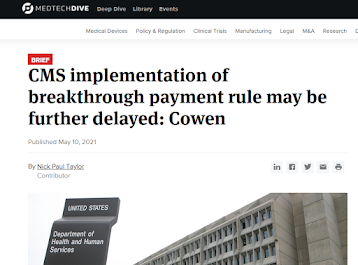 On May 13, Medtronic presented this slide to CMS in a meeting about finalizing the MCIT rule. 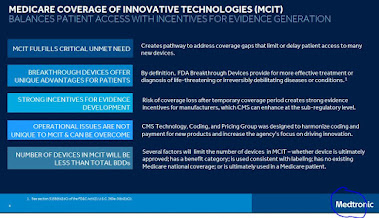