CMS will post final decision on MCIT by about May 15.

On Friday, March 12, after market close, CMS announced it was delaying implementation of the Medicare Coverage for Innovative Technology (MCIT) program.  The program, which was released as final by the Trump administration in mid-January, would provide 4 years of coverage for any devices cleared by the FDA as "breakthrough pathway" devices, from a start date of 3/15/2019.   The regulation also "codified" longstanding CMS rules defining "reasonable and necessary" as a coverage criterion.

The change is styled as a "60 day delay with comment period."   The new implementation date, if nothing else changes, will be May 15 instead of March 15.  Note that the regulations for MCIT have already, technically, been finalized for Code of Federal Regulations, all ready to launch (42 CFR 405.601ff).  However, perhaps because of this new rule, the January "final regulations" for MCIT don't appear in the eCFR (here). 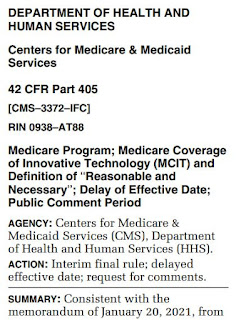 The publication today was not strictly "pro forma."  The administration gives several types of concerns.

Operationalizing the Rule.  For example, CMS notes the rule might be hard to operationalize, since it promises coverage "from the first day of FDA approval."   I would have assumed, or the rule stated, that existing coding and payment rules apply, and if a new code was needed, it would take a few months and providers would have to hold claims.  For example, NCDs are effective "the day they appear" but CMS often takes months to issue full-fledged codes or coding rules. On the other hand, if a device was bundled, it would be "covered" but without any net impact.  CMS adds that as the implementation drew closer, it realized it had "underestimated" operational challenges.

Bruce's takeaway:  I assumed "coverage" would be first-day but "claims" would take several months to implement, sometimes.  But that has occurred in other situations.  A lot of things might be "covered" but no added payment to a outpatient or inpatient bundle.

DME Rule.  CMS also cites some overlapped with a proposed, but not finalized DME rule that appeared last fall.

Volume.  CMS notes that breakthrough device volume was estimated, in the rule, by CMS, at 2-5 devices per year.  This made no sense to me, since a July 2020 publication had reported there were 200+ devices in the MCIT pathway already at that time.  CMS cites public remarks by FDA in February 2021 that 400+ devices were in the breakthrough pathway.  FDA here.

Bruce's takeaway:  The FDA devices annual report page is worth seeing on its own.

Validation in the Elderly; first do no harm.  CMS notes that some devices might not be well-validated in the elderly and there could be "patient protection issues" which would point toward non-coverage of the device.

Did your complaint get ignored? CMS notes that in the original public comments, some parties had asked for more details on implementation.   CMS gives   any negative stakeholders a chance to assert that their negative views were not properly discussed, aired, and dealt with in the CMS final rule.

Diagnostics Are In (for now).  Whereas the August rule proposal had been ambiguous about Diagnostics coverage, the final rule in January made clear it applied to all FDA breakthrough devices, including diagnostic ones.