MolDx Deletes Codes from Its LCD Scope: Retreats from Proteomics

Summary.  Since about 2012, the MolDx program has operating under a master LCD called "Molecular Diagnostic Tests."  One function of the LCD was to allow MolDx to treat certain tests that were not yet reviewed or covered, as "non-covered."   The LCD quirkily defined "molecular diagnostic tests" as assays of DNA, RNA, proteins, or metabolites.  We just discovered newly-released edit changes. MolDx appears to be walking back from asserting coverage or control of proteomic/metabolomic testing.

Medicare's documentation cited at links throughout this article, but also available in a cloud zip file here.

MolDx dates back to 2011/2012 (white paper here, ACLA letter here) and operates under a "master LCD" that defines its scope, and a couple dozen individual LCDs for specific tests or clinical use cases.

Molecular diagnostic tests are defined in the LCD as being, "any test that involves the detection or identification of nucleic acid(s) (DNA/RNA), proteins, chromosomes, enzymes, cancer chemotherapy sensitivity and/or other metabolite(s). The test may or may not include multiple components. A MDT may consist of a single mutation analysis/identification, and/or may or may not rely upon an algorithm or other form of data evaluation/derivation." (quote-unquote).

It looks like proteomic and metabolomic codes, which had previously been actively listed (hence requiring active deletion) are being deleted.  See table:

MoLDx is an important but quirky program, and I've counted 4 quirks triggered by the article updates.

1. Mismatch of LCD Text and Its Coding Article

The LCD text defines Molecular Diagnostic Tests as including DNA, RNA, proteomics, or metabolomics, but the corresponding article exempts all but DNA and RNA tests from its domain. So the LCD and coding article seem out of sync.

2. Palmetto Rules, Out of Sync with Other MACs in MolDx Program

The corresponding Noridian LCD/Article (L35160, A57526) haven't been revised for a year, so they are currently out of sync with the Palmetto MolDx documents.

3. MolDx Palmetto "DEX" Website Lists Tests as "Non-covered by MolDx" that MolDx Defines as Outside Its Scope

I realize that's a mouthful.

MolDx appears to be defining non-DNA, non-RNA tests as outside of its scope.  OK.

However, if you go to the official Palmetto- and MolDx-branded and Medicare-branded Diagnostics Exchange website, it's clear that some of the tests deleted from scope above, are concurrently listed as "non covered by Medicare Palmetto MolDx" on the DEX website.

Potentially, Medicare  Advantage plans could view the Palmetto- and MolDx- and Medicare-branded DEX website as a coverage decision source, see a test there being directly named as non-covered by MolDx Medicare, and non-cover it under Medicare Advantage.   This seems hard to square with the test being outside MolDx Medicare scope of review per A56853.  (For example, ineligible for a MolDx LCD to reverse the MolDx non coverage.)  I'm not sure what next steps for such a company would be.  Let's say they have code 80101, and it's a proteomic MAAA test, and it's deleted from eligibility for review by Palmetto-Medicare-MolDx, but it's listed on DEX as non-covered by Palmetto-Medicare-MolDx.  Seems like that would be a Catch-22 which could annoy someone significantly. 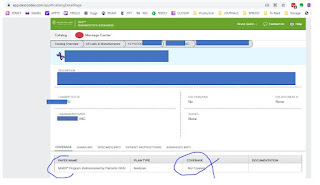 Article A56853 says that its code lists define the codes that apply under MolDx ("This addition and deletion is due to coding that is applicable to the MolDX program," quote-unquote.)

I think at the end of the day, MolDx is helping us understand that it focuses on DNA RNA tests, while reserving the right to contribute its staff expertise to other MACs in the MolDx consortium on other types of tests.