DOJ announces an indictment for "bribes and kickbacks leading to improper billing" - $117M against the owner of "Specialty Drug Testing LLC" in Monroe, Alabama. 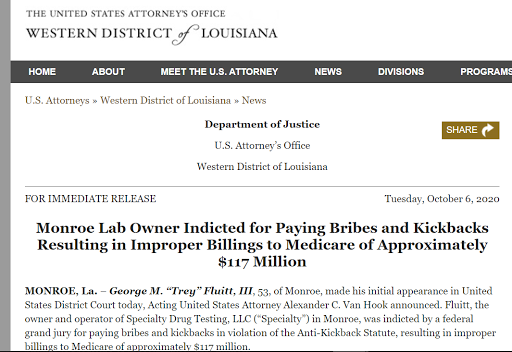 In the past several weeks, I've run a series of articles showing that a lot of Medicare fraud - in the many hundreds of millions of dollars - can easily be gleaned from available CY2019 data at the state and national level.   This can be tied to specific CPT codes and specific edits (or lack of edits) at a minority of CMS MACs.   DOJ has estimated the fraudulent charges in the last year or two, on genetic codes alone, exceeded $2 billion dollars.  This creates large anomalies in the public CMS data.

The DOJ press release we're discussing today gives the lab here as Specialty Drug Testing LLC.  A quick google search gives the NPI as being 1639577091.  (Here.)   Then turn to the Physician (Lab) Utilization Database at CMS, which is currently updated through 2017.  (2018 data should have been released in 6/2020).   There, go to CY2017 and search on the NPI number.

This gives you all paid claims by CPT code and dollar amount for Specialty Drug Testing LLC from CY2017.  The 2017 claims were modest, only $864,426 in total.  The spectrum of 2017 claims was as follows (click to enlarge):

CMS data staff are vague as to the cause of the delay (see prior link and here).

In addition, I've had a personal encounter with a MAC declining to release typically available data, and a client has had a MAC state that no FOIA data was available on a topic that HAS to have FOIA data available.   So:  Is a picture emerging that CMS cracking down on release of FOIA data in the weeks before an election?   You decide.

If so, CMS would be backtracking on publicly made policy decisions from 2014/2014 following FOIA-based court cases (here)(cloud copy here).