In October, Health Affairs published a major article on the growing power of Laboratory Benefit Managers, and I used it as an opportunity to link back to August investor calls at Myriad, such as their August investor call, describing growing impact of claims processing edits, prior authorization, and LBMs - entry point here.

Here, I'm flagging their February 6, 2020 investor call, where they continue to describe challenges with edits, prior authorizations, inappropriate denials, and other barriers to revenue.   (Open access tp transcript here).

In something called after-hours trading (which I don't fully understand) share price was reported as falling from circa $30 to circa $20.   More information when Friday's markets open.


Reductions in average selling price are largely unrelated to lower contract prices or ineligible patients. Instead, they are a result of shifting preauthorization rules, inappropriate denials, new documentation requirements and fluctuating coding directions.

To address these challenges, we have made significant organizational changes, including establishing a new department, which we have called revenue operations. This organization has the responsibility to develop new approaches and to coordinate resources across the enterprise to attack the highest priority opportunities.

For example, in the second quarter, we developed and deployed an early warning system powered by artificial intelligence to detect billing anomalies earlier so we can act on them immediately.

In other news, the CEO resigned and they are awaiting a potential improved coverage policy for Genesight from MolDx.   (Private payer edits have been slowing Genesight revenue, possibly due to edits on CYP gene codes).

They also remark, "Prenatal cash collections were negatively impacted by issues in billing operations that occurred during the transition of the homegrown Counsyl billing system to an industry standard system used by Myriad. While the issues will be resolved this quarter, the disruption in cash collections necessitated a negative adjustment..." 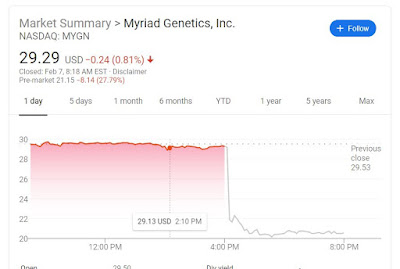 For an intro-to-reimbursement course I'm teaching in early March in SF, here.

One of the bugaboos for Myriad and other labs is "improper prior authorization."  There's an article in the February 3, 2020, JAMA on improper authorization, which is based on pharma, but probably has learnings relevant for the diagnostics industry too.  Here.