I trained in pathology at UCLA in the 1990s (I was doing an elective at the coroner's office during the 1994 LA earthquake), and was intrigued by the policy and process around autopsies.

Here's a letter in today's NEJM that leads to CAP viewpoints on CMS policy.   The letter highlights for NEJM readers that CMS recently deleted its autopsy rule.   U Vermont's Dr. Rueckert notes that in a new 1,037 case series, autopsies found major actionable missed findings in 2%.

CAP had protested the issue a year earlier, in November 2018, in a CAP letter to CMS which is online here.

The  now-deceased regulation, 42 CFR 482.22(d), recommended hospital staff secure autopsies in cases of "unusual deaths, medical legal, and educational interest."   It's expunged as of September 30, 2019.  CAP argued that CMS's regulation was redundant in medico-legal cases - those follow a legal pathway with or with a CMS rule.  But CAP liked the encouragement from CMS to hospital management to perform autopsies for unusual cases and educational interest.

The dearly departed regulation looked like this before it expired: 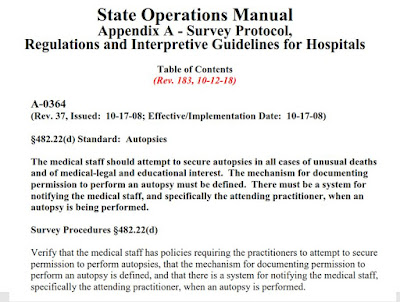 There's also a side story connecting autopsies in cancer patients with precision medicine, since the autopsy provides a chance for unlimited sampling of widespread tissue mets, or parts of one tumor mass, that's not possible with FNA, LBx, or other low-invasiveness measures.  Turna Ray at Genomeweb discussed this in an article in September 2019 - here.   See a representative research article based on rapid-autopsy genomics here.  The rapid autopsy can also provide unlimited tissue for research such as ex vivo explant tumor models.

CAP suggested some priorities where it DID want CMS to pursue regulatory relief.  CAP complained about the LCD process (page 2-3 of its letter.)

CAP also complained about burdensome use of unlisted codes (topic 7 and page 5 of its letter.)

When You Say Unlisted Codes, You Mean MolDx

Nationally the use of a few pathology (anatomic pathology) unlisted codes is almost nil.   In the wetlab, use of molecular unlisted code 81479 is about 12% of MoPath payments at $135M in 2018 (here).