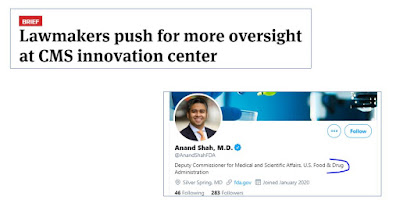 In January 2019, CMS created a new position of Senior Medical Advisor for Innovation.  The first holder of this position was Dr. Anand Shah, a Columbia University-trained radiation oncologist with NIH and FDA background.

In January 2020, Dr. Shah departed CMS for the FDA, taking the position of Deputy Commissioner for Medical and Scientific Affairs.   I've clipped the FDA's description of Dr. Shah's background as a footnote.

Track his FDA/Twitter account here.  For example, from his FDA position, he endorsed the NGS NCD expansion at CMS which occurred about the time he left.

The Affordable Care Act created the CMMI, the Center for Medicare and Medicaid Innovation, through Section 1115A of the Social Security Act (here).    Previously, demo projects at CMS were created one legislated project at a time, and could represent either good ideas or some pork belly shenanigan snuck into the bottom of a long bill.

Section 1115A allows the CMMI to create any demo project it wants, waive any law it needs to, to do so, and the demo can be as large as it wants and run as long as it wants.   (Yup - you think, "Woah?!")

In fact, Republicans in 2016, before the election, were quite agitated about CMMI as it was expanding under the Obama administration (here).  Riding that wave, CMS under the new administration called a temporary halt to CMMI initiatives.  And the value and quality of CMMI's work was criticized by GAO.

Seems like a long time ago.  In fact, the administration recognized that CMMI's broad powers could allow it do to major initiatives, like block grants for Medicaid, drug pricing reform, etc.    There's also a complicated section that allows CMMI to put in play processes that permanently replace existing laws with new ones developed by CMMI projects.

As noted in Healthcare Dive here, and in a press release from Congr. Sewell here, at least some lawmakers on the Hill don't want CMS to have the authority to suspend any legislated rule in the name of a demo that could run nationwide and be of unlimited duration.   While it seems like a long and awkward bill, read H.R. 5741 to see what they came up with.   It deals both with (A) how demo programs can be established (guardrails) and (B) how the results of demo projects can interact permanently with Congressional laws (very complicated.)

There's a lot of health policy media about H.R. 5741; rather than list a lot of links, see for yourself by going to Google and search Sewell and CMMI together; such as here.

See a detailed blog at Health Affairs on February 12 by Micklos, Pierce-Wobel, and Traylor, about reforms needed to make CMMI more useful and viable - here. 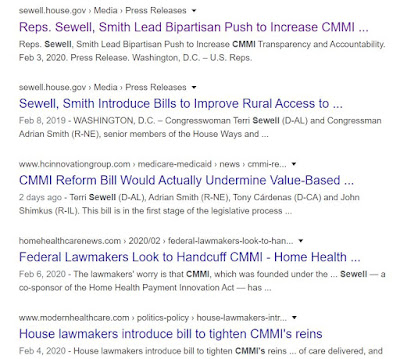 Although not directly related to CMS innovation or FDA-AI-diagnostics, in today's IPO news, Schrodinger, a software company that assists drug discovery, had a $230M IPO this past week; for its market cap check Yahoo Finance here.  (Google gives its market cap as $1.2B.)    The prospectus I found listed the share price as $17 but as of today it traded at $26 (over several days, it rose to $32 and slipped back down to $26).  What's interesting about the IPO is that it generates a 262 page prospectus about its business model, IP, and business plans - here.  Its revenue is running about $70M a year.

He is a widely recognized authority on how innovative medical products are developed, regulated, financed, and delivered. Dr. Shah’s efforts have focused on the development and implementation of innovative approaches to value-based health care delivery and expanding competition and consumer choice. He recently served in two senior leadership roles at the Centers for Medicare & Medicaid Services (CMS).

I'm not an attorney, but note that on February 14, 2020, CMS lost a case that would have authorized work as a requirement for some Medicaid enrollees in Arkansas (article here, ruling here).  (The court notes it was applying the same reasoning as a prior ruling on the same topic in Kentucky.)  As far as I can tell, CMS attempted to allow the work waiver under the CMS "Medicaid waiver" authority, which Court rejected.   But if CMS had created the work demo program instead under its CMMI authority, it might have worked, since "any" program can be created there under current law.

See an article on Medicare Advantage plans that could be designed as "special needs" plans for homeless people - here.