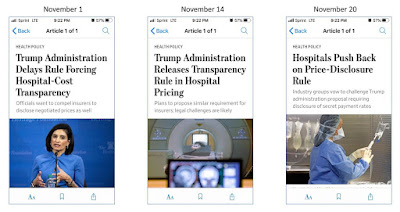 A major theme of the Trump Administration this year has been healthcare pricing, including surprise billing (here) and price transparency (for June 2019 executive order, here.) In late September, a number of stakeholder groups urged the Hill to move forward with surprise billing legislative, which had lost momentum.

Somewhat confusingly, today's release has two different components, and one part is a second and "final" part to the annual OPPS final rule, most of which was released November 1 (here).  In that rule, CMS merely stated concisely that "We intend to [issue] a forthcoming final rule."  Here it is.

Then, there is also a separate PROPOSED rule, which has its own website and its own fact sheet.

Headline:  The OPPS Final Rule "F2" governs hospital requirements for publishing price transparency.  While I believe past state legislation has defined this as chargemasters, CMS defines this as per payor negotiated rates.   All rates need to be available to a patient, but 300 key rates need to the public.  Meanwhile, the PROPOSED rule is about insurers posting negotiated rates. 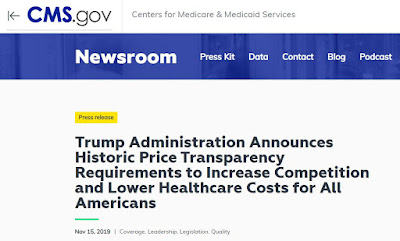 With all the fuss about transparency, all CMS prices have been posted online for a decade or two, physician offices, imaging, lab tests, hospital based surgery, inpatient, outpatient, drug prices, and so on.   Nothing secret about all of that.

And with commercial insurers, while there has never been mandatory posting of contracted rates, either from the hospital side nor from the payer side, there's one thing hiding in plain site.  These rates are sent out by the millions, tens of millions, hundreds of millions, into the public space via Explanations of Benefits.   I know if my imaging center charged BCBS $1200, got paid $319, and my copay was $35.   I know if my doctor charged BCBS $225 for an office visit, got paid $87, and my copay was $20.   While these circulate by email, by postal mail, such agreements and rates circulate in society in hundreds of millions of documents.  Easy to access?  No.  But different in a fundamental way from a true "secret."