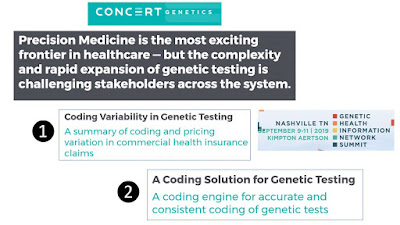 We're all familiar with correct coding principles, some (brief ones) found in the CPT handbook, some in Medicare documents (Correct Coding Edits), some unwritten, some in payer articles, etc.   What Concert proposes is to have one uniform, systematic set of rules that are always applied as algorithms.  They are commonsensical (if there is a PLA code, use PLA code.  If there is a fit to a GSP code like Hereditary Breast and Ovarian Cancer, 81432, then apply that.   If there is a Tier 2 code, then apply that; and so on).

It's different than today's coding because, while there is a dream that all human coders will code correctly and the same, here, a computer (or a human following iron-tight rules) will always reach the same result.

One is is special rules.  Medicare MACs may have special coding rules they insist be applied (although sometimes this collides with payers; Myriad 2019 case here.)   Medicare has national special coding rules (Correct Coding Edits), although sometimes CCI rules are bizarre, as the industry has complained about some 2019 genetic coding rules therein (here, here).   MolDx has a "Test Panel" coding rule, which is dead-simple to state, but public data shows that Noridian is unable to consistently apply it.  Concert plans to have one uniform set of rules, limited in number, applied in specific order.

While the top 5 codes did include 81479 (unlisted code) at 18%, if you went inside that unlisted code, most of the 81479 volume was driven by a few tests like Myriad Assurex Genesight, which is about half the 81479 volume.   (And almost all of the 81479 billing comes through the MolDx states, zero elsewhere).   In short, CMS data shows heavily concentrated use of a few blockbuster genomic tests.