Myriad Genetics' share price spiked around June 19, 2019, when the company announced it had resolved (expected to resolve) a qui tam case for about $9M.  The spike suggested that the market might have expected worse, and the settlement removed an overhang.   Links and backstory here.

On July 31, the share price shot upward again, on news that United Healthcare planned to cover the Genesight test.

However, on August 13/14, the share price shot downward on news of reduced revenue and an FDA action regarding its GeneSight test.

Reduced revenue was attributed in part to the rising activity of lab benefit managers (which raise the denial rate on claims the payers receives.)

Myriad also reported that FDA had directly asked it to change its reports for GeneSight, which Myriad believes it should not have to do.  Myriad also dropped some specialized forms of the GeneSight test because of what it said was evidence that did not live up to its standards.

Genomeweb did a deeper-dive story on August 16 here, it doesn't seem to have a subscription flag so it may be open access.  Suggestions that FDA would like drug advice stripped out of PGx reports, leaving just gene reports.  If that happened (and Myriad protests that it won't happen), the physician report would no longer be the same Genesight report that was shown to be clinically effective in clinical trials.

Myriad also commented it was "optimistic" about wider coverage in a Medicare LCD "in this fiscal year."   The Medicare MolDx program is likely to release its various new LCDs for its autumn public meeting within the next several weeks, which will trigger a 45 day public comment period.  MolDx held a public workshop on psychiatric pharmacogenetics evidence in June (here).  CMS releases new-draft LCDs only on Thursday, so August 22, 29, and September 5 are among the possible dates. 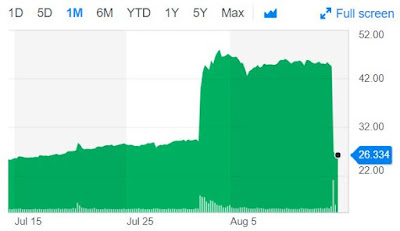 Myriad also was optimistic about Genesight's status under a BCBS Evidence Street evaluation, and hoping to get some extra facts and corrections into an "off-cycle" reprint of that evaluation.

* August 13 360Dx stating in part, "Capone further noted that during FY2019, the cumulative impact of these laboratory benefit management programs across Myriad's portfolio of tests was "unprecedented" and reduced revenues by about $50 million."