The "Mainstream Media" e.g. Bloomberg, has sometimes criticized the Trump administration for "scattershot and at times contradictory" handling of health policy (here).

In contrast, there was a thoroughly planned and quite well-coordinated roll-out of broad sets of plans to improve renal care under CMS, across the prevention, dialysis, and transplant levels.   This occurred around July 10, so we can look back now with some perspective. 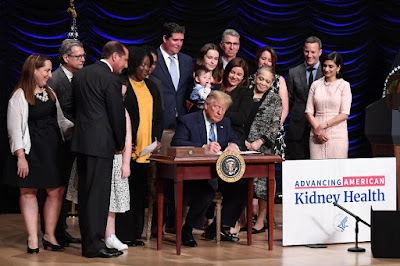 In April, Secretary Alex Azar gave a detailed speech to the National Kidney Foundation (online here).   He focuses on renal disease as one of the areas of long-accumulated policy failures and an issue the Trump administration wants to address.  He highlighted the long transplant waiting lists, the burdens and morbidity of dialysis, and the lack of home dialysis in the U.S.  (He compared our home dialysis rates to Hong Kong and Guatemala, both of which do better).  He highlighted the public private partnership of KidneyX, designed to speed the creation of wearable or implantable dialysis options.

He concludes by noting, "We just need renewed ambition and the right policies. President Trump has the kind of ambition we need to deliver much better care for Americans, even if it means bold change."

The program roll-out was complex and well-coordinated, with numerous documents springing up online, from White House to HHS to CMS.

Within CMS, CMMI had its own webpage and documents: here,
The Federal Register official publication was pre-released for July 10 and formally published on July 18:
I've put key documents like the CMMI rule and the Executive Order and most press releases in one cloud zip file here.   My point is that the above reflects a monumental amount of effort and coordination and the launch was highly organized over the different executive divisions.   While a recent 300-page book highly critical of the current Cabinet was recently published, the book had essentially not one critical word to say about HHS (except some a couple references to Joe Price's air travels in 2017). 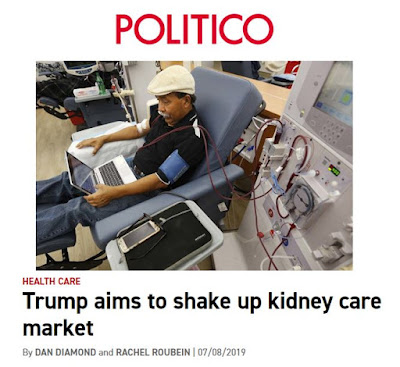 Overall, this was a very impressive roll-out, especially when you consider the relatively hostile media environment and the fact that the roll-out of anything is ten (or a hundred) times harder than it looks on the surface.

Another point is that this Administration often flags what will happen 3-6 months in advance.  Even for people far outside the Beltway, the April 2019 speech by Azar (which I opened with) flagged most of the emphasis points for the ESRD roll-out in July.  Similarly, speeches by Joe Grogan and Seema Verma early in the year (blog here, links to full text therein) flagged themes on out-of-network payments and price transparency (Grogan) and CMS's new approaches to breakthrough technology (Verma) that would burst into wider attention in the summer.

Any reservations?  Maybe a few.  There are a few bullets in the Executive Order that seem superfluous - "FDA shall accept PMA applications for artificial kidneys..." - I'm pretty FDA would do that with or without an E.O. bullet point.  And my sense, as an outsider, is that a lot of really smart organizations and experts already work full time and really hard on donor allocation (e.g. one entry point here, but there are many).  But good luck to them on the implementation work ahead.

A key policymaker for ESRD and other recent efforts was Abe Sutton, a millennial and McKinsey graduate, who leaves White House for law school in August 2019 - here.  He was part of the Domestic Policy Council from the first Trump year, 2017, until now, rising to be head of health policy for the DPC.
___

In JULY, the big theme in healthcare was ESRD.   In JUNE, it had been payment transparency and out of network billing, here.  In AUGUST, one big theme is Antibiotics policy, here.

For September 2019 JAMA articles on dialysis ownership vs results, here and here.
For a 2018 article on current state incentives for organ donation, Levy, here.
For a November 2019 JAMA perspective on Trump proposals, Thomas et al, here.

For a September 2019 trade journal view on reactions to the Trump plan, here.