In mid-2018, Myriad Genetics acquired Counsyl, a leading provider of large-panel carrier screening for family planning.   Beauchamp et al., affilliated with Myriad, have published an interesting open-access paper on the cost-effectiveness of 176-condition carrier screening, compared both to no genetic screening, and compared to minimal screening (such as cystic fibrosis + spinal muscular atrophy testing).

The authors find that expanded carrier screening is cost effective (defined as less than $50,000 per QALY gained).   Find the paper here at Genetics in Medicine, February 2019.

Carrier screening looks to recessive genes with relatively rare frequencies (less than 1 in 50, sometimes less than 1 in 500), so family history is not helpful in selecting genes to be tested.   For several years, AMA CPT has provided a code for "Ashkenazi" carrier panel screening, and in January 2019, AMA released CPT code for pan-ethnic carrier panel screening.*  The codes are:

I had some contact as a consultant with the code application for 81443, which took several cycles before being accepted by AMA CPT.

The ACOG guideline was most recently revised in March 2017, stating:


The goal of genetic screening is to provide individuals with meaningful information they can use to guide pregnancy planning based on their personal values.  Ethnic-specific, panethnic, and expanded carrier screening are acceptable strategies for prepregnancy and prenatal carrier screening.

The Beauchamp paper uses extensive carrier rate genetic analysis combined with extensive modeling of future costs, since no one has used carrier screening and then observed actual outcomes for decades into the future.

The economics decision tree is relatively easy to understand: 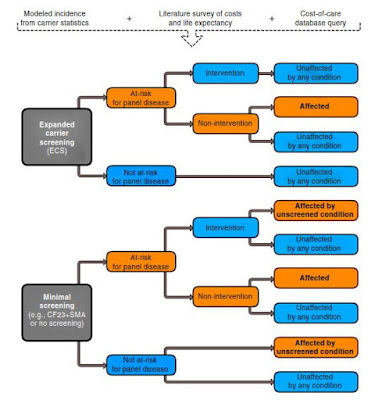 For example, under ECS testing, large gray box at top, the individual may be at-risk for one of the genes (orange) or not (blue).  If at risk (orange), then they may be an intervention (blue) or not (orange) - and so on.  For intervention rates if a gene was discovered, the authors modeled 77% observed intervention rates, with 50% and 100% used as comparators.

The economics are based on concurrent panel testing for both partners.  Arguably (I think) it can be even a bit more cost-effective to test one partner, and if negative for a recessive gene, stop.  Had this approach been use (I think) the economic results would have trended only better.

Most models produced 3-year cost/QALY as below $50,000, and cost/QALY was similar to BRCA testing in adults (see their Figure 2).

* The code was passed in May 2017, making it too late for the January 2018 annual CPT book.  It went through the summer 2018 CMS crosswalk process, with CMS pricing finalized in November 2018.  The code was first published for the 2019 CPT book.  Note that CMS gapfills or crosswalks all new lab CPT codes, whether they are likely to have Medicare use or coverage or not.