Wall Street Journal has posted a story that Human Longevity Inc (HLI) is raising funds under the strictures of a "down round," which has lowered the valuation from $1.6B  eighteen months ago, to $310M today (negative 80%).   The round would raise $25M under rules (WSJ uses the word "onerous") that would protect new investors.   WSJ story here.  MedCity here.   (MedCity links to a cloud term sheet which I don't believe WSJ did (here).)

According to the Journal, employee headcount has fallen from 300 to 150, and "its chief executive officer, chief medical officer and chief operating officer all departed in 2017, according to their LinkedIn profiles."   Google suggests that Chief Technology Officer has also been a rapidly passed-along title. 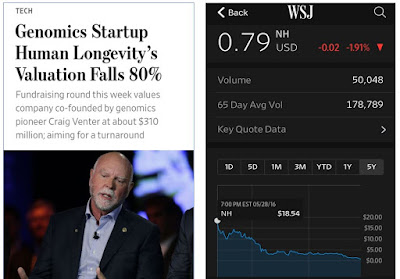