In a article Friday September 21, 2018, New York Times writes that a deal between Memorial Sloan Kettering, its pathology department, and a spinout venture capital funded company has "ignited a new uproar."

According to the Times, MSK's spinout, Paige.AI, received $25M in new venture funding earlier this year and in return for a 9% institutional equity stake, has exclusive rights to findings from a 25 million-patient slide archive.  According to the times, the archive represents not only patient tissues but "decades of work by its world-renowned pathologists."

The article describes various facets of the project while stating that: "Experts in nonprofit law and corporate governance questioned whether Memorial Sloan Kettering, which is a charity, acted properly in what is known as a related party transaction..."  The concern seems to be that decision-markers in greenlighting the project were also stakeholders in the project itself.

See the article here.   The Times describes this as "a new uproar" because in the last few days the chief medical officer resigned after concerns about publications that lacked full conflict of interest disclosures - here. 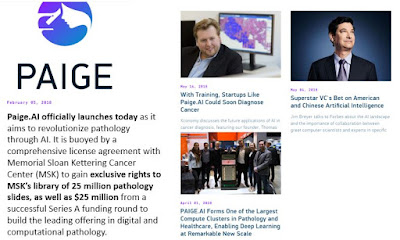 ___
The Times mentioned Paige.AI in a September 14 editorial, but only in passing.  For a February 2018 article about the project launch, TechnoCrunch here.

The Times article today notes that the prior chairman of Pathology (2003-2011) was critical of the deal made by the current chairman (2013-present).