For those with a Genomeweb subscription, see Turna Ray's deep-dive story on responses from cancer groups to an Oregon policy statement against coverage of somatic mutation gene panel tests in cancer. 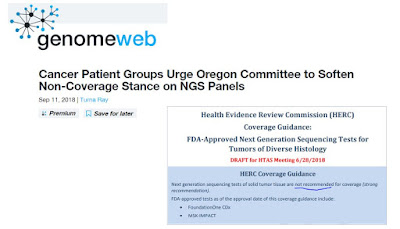 According to Genomeweb, one of the issues discussed by stakeholders is the pan-cancer coverage under the NCD and the question of who will be tested under a potential Oregon Medicaid program.   One stakeholder notes the differences in approved drugs for lung vs prostate cancer and said the difference was "apples and oranges."

Oregon also hosted the OHSU Evidence Based Practice Center, which is supported as part of the national network of practice centers that contract to organizations like USPSTF and AHRQ.

For a negative article on precision medicine in New York Times, appearing the same day as this Genomeweb article, here.

__
* Page 6 of this document discusses recent review of Oncotype Dx and a "weak" recommendation for coverage in breast cancer patients with 1-3 nodes.

** For 5 tumors found in both top-ten lists, by percent of that lab's cases, the correlation between the FMI and MSK percentages was r = 0.7.