On this blog, we noted in June 2018 that FDA had used a press release website as an opportunity for Dr. Gottlieb to ventilate some innovative policy ideas about US payments and incentives for antibiotics, here.

On Friday September 14, 2018, the Pew Foundation, which has a major issue in areas like antibiotics and sepsis, hosted FDA Commissioner Gottlieb for a speech on new and innovative FDA initiatives on the major public health issues of antibiotic development and microbial resistance. 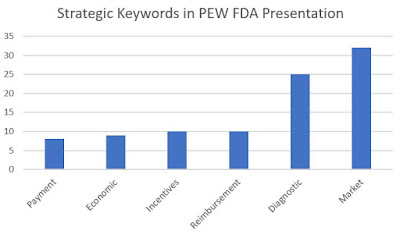 Extensive direct quotations from the PEW event in regard to payment systems and device innovation follow, after the break.

In addition to efforts at FDA, CDC, and at NIH, the federal government funds BARDA, the bioterrorism research fund.  One major effort is an international public-private partnership called CARB-X, aimed to stimulating the early stages of innovation for new-generation antibiotics despite the market forces that make this difficult.  See BARDA here, CARB-X here.   BARDA also has a new 2018 effort in sepsis innovation and in part, diagnostics... here.  Trade press for BARDA's new Division of Research, Innovation, Ventures (DRIVe), here.

There is also a Presidential Advisory Council on antibiotic resistance, PAC-CARB, here.  (Its next meeting is January 30, 2019; its September 2018 meeting is here, including an Abx stewardship report by Dr Cosgrove of Johns Hopkins here.) 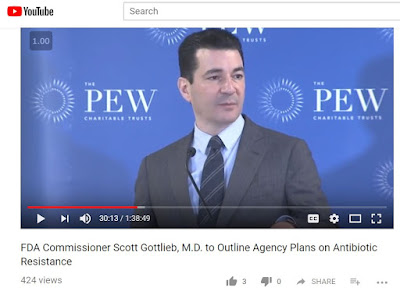 Rick Bright, the head of BARDA, attended the conference, getting a call-out from Gottlieb.

Gottlieb left quickly after his speech, after taking one question from Politico and one from Stat.  The following panel was comprised of FDA senior leadership in the four relevant divisions - Edward Cox from Office of Microbial Products; William Flynn, Center for Veterinary Medicine; Steven Gitterman, Microbiology Devices, CDRH, and Carolyn Wilson, CBER.

For an article from Bloomberg on the antibiotic development crisis, here.  There is also an academic literature on antibiotics R&D economic bottlenecks, see e.g. here and here and here.

There's an interesting discussion of something I hadn't heard of, a program called SHIELD to create powerful real time EHR based sharing of antibiotic resistance data from hospital labs.  See an impressive deck by FDA's Michael Waters on this, here. See Gottlieb's comments on that topic, below the break, in the transcript.  It's part of a broader set of important efforts called NESTcc.

In a speech within a week, Janet Woodcock of CDER also took a market-based approach, decrying the impact on generic manufacturers of the monopsony power of drug wholesalers (here).


To sustain a strong antibiotic drug pipeline, we need a combination of push incentives to support research and development as well as pull incentives to attract more investment.  A lot of the focus so far has been placed on developing push incentives. I think much more emphasis needs to be placed on developing pull incentives. These can create natural markets for drugs targeted to rare, but dangerous multidrug-resistant pathogens.

We continue to see a need for additional pull incentives in the form of reimbursement reforms that allow innovators to capture more of the long-run social and economic value generated from the development of new antibiotics. Large pharmaceutical companies have, for the most part, exited from antibiotic research. [Novartis exited antibiotics in 7/2018, here.]While some small venture-backed companies remain engaged, these companies are not as well positioned, generally, to fund the larger confirmatory trials required for regulatory approval. What we'd like to see most of all is a balanced level investment.

The problem is that the ideal drug is one that will be seldom used under the current reimbursement scheme for drugs, though profits are driven off of the number of prescriptions that get written for a drug. But when it comes to developing medicine to treat multidrug resistant microbes, the goal is to basically hold such a drug in reserve and try not to use it. In other words, the reimbursement scheme is in direct conflict to the public health goals...

Creating new antibiotics isn't any easier than developing a drug in any other class. Although it's sometimes been said that it is, it's challenging pathway, and the commercial challenges in this context are more daunting. Generic antibiotics were also inexpensive and widely effective, making them first-line treatments. Medicare's Inpatient Prospective Payment System for hospital care is pegged to the price of generics. So, novel drugs end up eating into the profits of hospitals when they're used in the hospital setting, and most drugs that are used for antimicrobial-resistant pathogens are ultimately going to be used in an inpatient setting.

One constructive way we could start to develop innovative payment mechanisms that allow companies to capture greater upfront share of the social value of antibiotic drug development is looking at different approaches to reimbursement.

Reimbursement reforms could include a mix of milestone payments and subscription fees for developers of FDA-approved products, with high economic and clinical value targeted at multidrug-resistant organisms and linked to proven clinical outcomes.

A subscription-based model, in particular, could see hospitals paying a flat fee, a flat rate for access to a certain number of doses of an important new antimicrobial. These subscription fees could be priced at a level to create a sufficient return on the overall investment to develop drugs with a certain profile. This should have the effect of creating a natural market for drugs that meet certain important specifications. The FDA is actively discussing approaches like this and continued innovations similar payment models with other agencies, including CMS, as well as private sector partners.

New approaches to reimbursement, that could be explored, might also include new technology add-on payments for certain new antibacterial drugs that meet critical patient and public health needs. The Gates Foundation, BARDA, who's here today, Rick Bright, thank you for joining us, and the Center for Medicare and Medicaid Innovation, could all help us join with commercial insurers to provide a natural testing ground for these kinds of innovative payment models. These discussions are going on. These payment models might include the subscription-based model that I spoke about, and these incentives might be linked to the promise of effective stewardship efforts by providers and manufacturers, to make sure that we maintain good oversight of the drugs that come through such a pathway.

CBER's Interact Meeting Program was recently created for sponsors to engage with CBER staff and obtain advice on a specific topic or issue that's critical to early product development. The advice provided by CBER staff to a potential sponsor during Interact meetings may help streamline development by, for example, helping sponsors avoid unnecessary preclinical studies.

We're also taking new steps to support stewardship in human [shifts from vetinerary] medicine. To advance these goals, the FDA has worked with manufacturers on the development and availability of two of new generations of devices that can identify bacterial and fungal pathogens directly from specimens, such as blood and spinal fluid, stool samples, sputum, without the need to wait for growth in cultures.

These tools can reduce the time for diagnosing the precise cause of a disease from days to hours. Several tests can also identify the presence of antimicrobial-resistant genes, significantly enhancing the ability to select targeted treatments, reducing broad-spectrum antibiotic use and improving patient outcomes. Lastly, FDA is working closely with manufacturers and academia with next generations of biomarkers to rapidly identify whether a patient's symptoms are due to a bacterial infection or, for example, when antibiotics can be stopped, thereby avoiding substantial unnecessary antibiotic use.

It's been long recognized that differences in hospital reporting on which specific AMR tests were conducted, and how results of these tests have been reported has substantially hindered the ability to track antimicrobial resistance and implement decision support for treating physicians. Working in partnership with more than 40 other stakeholders, including CDC and National Library of Medicine, and pharmaceutical and device industries, and others, our device center's Office of In Vitro Diagnostics and Radiological Health  has led the development of interoperable standards for the transmission of device codes for manufacturers to clinical laboratories.

This work is supported the development of a microbiology coding manual. This new resource describes the effect of implementation of about 12,000 microbiology codes into consistent electronic diagnostic results. Reducing inconsistency and reporting test results should substantially improve the reporting of antimicrobial resistance. Continued development of this program called the Systemic Harmonization of Interoperability Enhancement for Lab Data, or SHIELD - it's pretty well named - should unlock the ability for real-time clinical support across all electronic health records

Our Office of In Vitro Diagnostics and our drug center colleagues have also published a draft guidance titled "Coordinated Development of Antimicrobial Drugs and Antimicrobial Susceptibility Test Devices" - not as well named - this policy can facilitate the availability of diagnostic devices to test organisms for antimicrobial susceptibility at the same time, or very shortly after approval of a new antimicrobial drug. We'll be working to finalize this guidance very soon.
Coordinated product development between drug and device developers can be very effective in streamlining the regulatory pathway. Such coordination has resulted in antimicrobial susceptibility devices being available almost immediately or within weeks of recent new drug approvals.

[Note - without this, there would be a new drug for Resistance Type "Y" but no tests to tell if the bug is sensitive to the new drug Y.]