We frequently hear the number that lab tests are 2% of healthcare costs but drive 70% of decisions.  The first number is true; the financials are a matter of record.

But the "70%" of decisions is both very widely quoted and occasionally critiqued as an "urban myth" without a good original source.

This month, Dr. Fernando Chaves, global head of medical affairs at Ortho, has an op ed at MedCityNews about the value of diagnostics (here).  Moreover, he cites a paper that's new to me, Rohr et al. 2016, which reported that 66% of decision making was based on IVDs.  Find Rohr et al. at PLOS One, here.

Notably, 80% of the doctors interviewed estimated that >5% of healthcare costs were expenses for diagnostics, so they markedly overrate the size of the lab industry and its small role in total costs.

For impact on decision making, see Rohr et al. Table 2, below.  The study was funded by Roche. 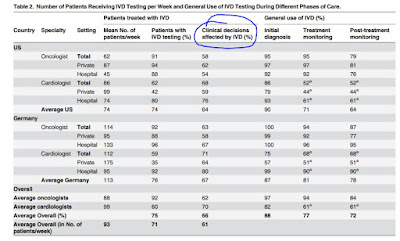 In another interesting Roche-funded study with Ventana contributors, authors Vyberg et al. assert that for every $1 saved by labs using "cheaper reagents" in IHC, costs to the health care system are $6.  See here.  See similarly Garrison et al. here, estimating the annual US socioeconomic loss (including lost QALY) due to inaccurate Her2neu results at $1B.