On March 14, 2018, the SEC issued a press release with the title: "Theranos, CEO Holms, and Former President Balwani Charged with Massive Fraud."

The 24-page SEC PDF against Holmes is online at SEC here.    Less-noted is the 23-age SEC complaint against Balwani - which describes him as Holmes' one-time boyfriend; here.

The decline of Theranos is usually traced to an October 2015 expose' by WSJ's John Carreyou (for the story on the story, here).  And in April 2016, David Boies was still telling NYT that he and the board have complete faith in the CEO.  But by April or May 2016, Medicare data would have been published showing they had only $15,000 in Medicare billings in 2014, although they confirmed to investors that in 2014 they had $100M in revenue.   See below.

I kept an online running inventory of web articles about Theranos from December 2014 to December 2016, totaling about 500 links.   Here.

The case has two aspects: (1) overstatements of the success of the Edison point-of-care platform, and (2) overstatements about actual revenue.   This second story is much newer and is my focus here. 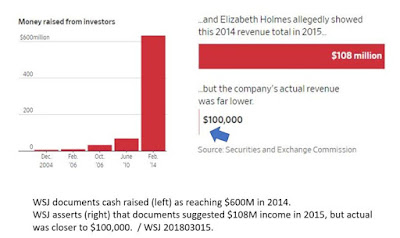 Discrepancies between lab revenue claimed versus actual would have materialized annually from Medicare public access records.  I've put Theranos Medicare payments in the cloud for CY2014 and CY2015, but these are just pulls from the open access CMS dataset.
Since Medicare revenue is usually 1/4 or 1/3 or more of lab revenue for tests (here), it would be hard to extrapolate from these public numbers ($15K or $100K) to income of $100M.   If what Theranos was asserting to investors for clinical revenue was far different than actual, the gap would have declared itself at regular annual intervals in public CMS data.   The train wreck would be fast and there would be nowhere to hide.

This financial issue would have come out and been the same story, even if the Edison lab machine had worked perfectly.  Even if John Carreyou had never heard of them.  It's remarkable.  It's not just a "misleading story" like convincing yourself the Edison is better that it is, or holding a delusional belief it is getting better faster than it is.  The financial statements can't be classed as wishful or misguided; they were like jumping off a building without a parachute.


___
Regarding tests per patient.  For 85025, CBC, Theranos did about 1.05 tests per patient.  Quest did 1.6, with some Quest centers doing >2 per patient (same database; data not shown).
___
On a personal note, as an MBA working with larger and smaller startups, I'm still amazed they could raise >$500M while the CEO owned half of the company but controlled 99% of the voting stock, and the board members were 85 year olds who knew nothing about healthcare or technology, rather than voting investors.  It's an overused word, but it is - amazing.