Brief Blog: Some Nerdy Aspects of the Lab Gapfill Process

For many years, CMS has used either a "crosswalk" or "gapfill" process to assign prices for new laboratory tests.   This process is still used for new laboratory tests, up until the time the next triennial PAMA pricing exercise occurs.   Right now, in spring 2018, about 19 codes are in the active gapfill process.  Around April/May, CMS will post MAC proposed gapfill prices and trigger a 60 day comment period.  (Sounds like you could base an office lottery on the CMS date).   Final MAC gapfill prices will be posted in September.


The Gapfill Process in Regulation
The gapfill process was formalized in regulation by CMS in 2007 due to a Congressional request (the 2003 Medicare Modernization Act, Section 942; see 42 CFR 414.508).  PAMA also puts gapfill rules in regulation, although in a somewhat patchy way.   PAMA (c)(2) describes the information that gapfill should concern, but as far as I can see, PAMA doesn't give CMS any stated way of handling the gapfill information (e.g. calculating medians of MACs).   Regulation at 414.508 says CMS will set prices at "the median of contractor specific amounts."

Now, in 2018, CMS has no more CLFS zones, so presumably CMS will set gapfill prices at the "median of contractors" rather than the median of states or zones.

(Alternatively, if you counted MACs only once, it would be 4:3, and MOLDX would also control that method.)

2018: Gapfill and MAC Rationales
In final PAMA rulemaking of June 23, 2016, CMS stated that it would require MACs to provide a "rationale" for gapfill decisions (p. 41086).  There were no codes being gapfilled in CY2017, but presumably now in CY2018 MACs will be required to provide a "rationale" for their gapfill decisions.  The "rationales" for CMS crosswalk prices can be pretty scanty, so don't expect too much from this new requirement for gapfill rationales.

Codes in Play for Gapfill during CY2018 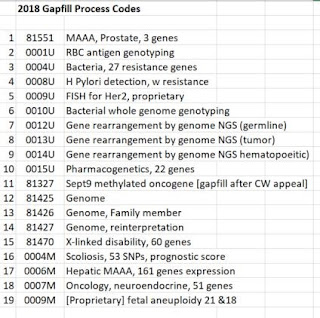