AMA CPT releases a new code set each fall, for codes that will be effective the coming January 1.   Normally, CMS prepares pricing for the codes between summer and fall.   It uses different methods to price physician services and lab tests.

Many of the molecular codes that became effective this past January 1, 2015, were not priced by CMS during 2014.  CMS national policy staff determined they could not administratively price the codes - such as "exome" and "genome" sequencing and "gene panels" for clinical conditions like cardiac or hearing disorders.   So, currently, from the beginning to the end of 2015, the codes are priced in stages by a "gapfill" process using the expertise of Medicare's regional medical directors.

On May 26, 2015, CMS released a round of draft gapfill prices on 29 CPT codes.  They pricing is open for public comment through July 20.   The CMS website for these prices is here.

Most of the codes received no pricing at all.  CMS released its draft prices on ten codes; the other 19 tests were left blank by the contractor medical directors.

After the public comment period, the harvest of which will be distributed to the contractors, CMS will collect final prices in August and publish them in September.   As a final step, CMS will assign each code the median of the MAC prices.  The assigned prices will become Medicare's national fee schedule prices.   (In 2013, CMS appeared to set median prices only if over half of the contractors submitted a price.)

CMS accepts public comment on the published proposed prices until July 20, 2015.  The full webpage (as found at CMS) is clipped below.

Below, note, I list the "average" of the several dozen columns in the CMS spreadsheet - CMS would calculate the median by eleven MAC regions and not by 50 states.  The standard deviation (SD) column gives a rough reference of whether reporting MACs had much difference in pricing, but again, it is an SD of the spreadsheet columns (states), not calculated per MAC region. 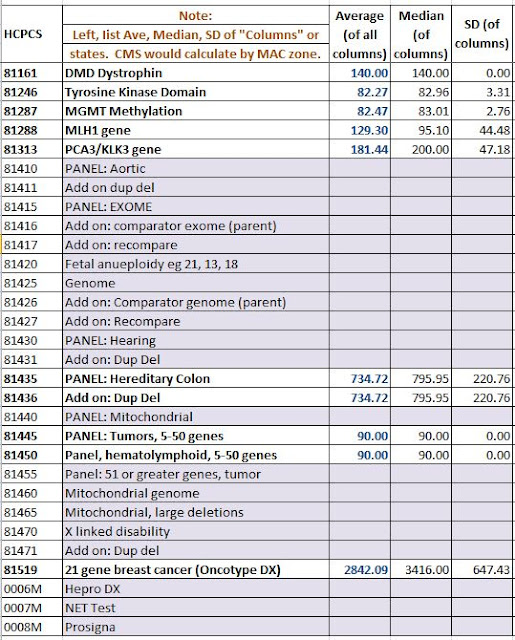 The text below is copied from the CMS Web site:

This file includes test codes and interim prices, by locality, for clinical diagnostic laboratory tests that CMS determined should be priced by Medicare Administrative Contractors (MACs) for 2015 using the gapfilling methodology.  The criteria and process for gapfilling are specified in 42 CFR 414.508(b).  A reconsideration process for tests that are gapfilled is specified in § 414.509.  The final pricing file will be posted on the CLFS web site around September 2015 and will also include the national limitation amount and midpoint for each test.


If there is no price for a given code by a specific MAC, this may be due to one of several reasons, for example:

For more specific information on why a payment rate is not indicated in this file, please contact the local Medicare Administrative Contractor.


The public is invited to submit comments on the preliminary pricing decisions.  Please submit any comments to glenn.mcguirk@cms.hhs.gov  by July 20, 2015.

_____________________
To discuss how the changing healthcare system and Medicare policy affects your company, association, or investments, contact Dr Quinn through FaegreBD Consulting.