On November 30, 2017, CMS released a 65-page, 45,000 word NCD proposing an entirely new policy approach to all uses of next generation sequencing in oncology.

I've had the chance to talk to a number of stakeholder groups and read the NCD several times, as well as underlying documents such as the FDA approval review for FMI F1 CDx.

Here, I post a 20 page (7000 word) white paper on the NCD and its potential implications. 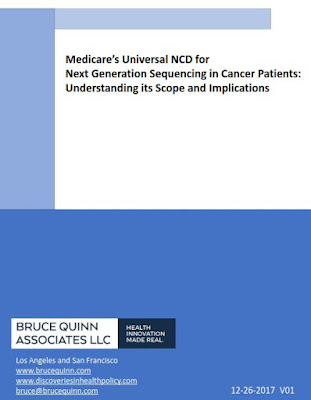 This white paper was downloaded 450 times (December 25-January 5).   More after the break. 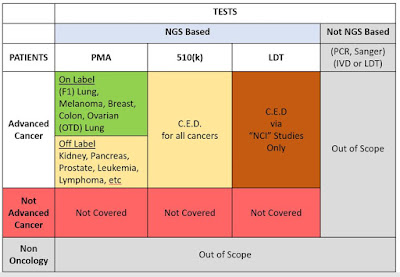 
On November 30, 2017, the Medicare agency released a wide-ranging coverage decision that governs all uses of next-generation sequencing technologies in all Medicare patients with cancer.   The proposal is open for public comment until January 17, 2019, and the policy will become effective in March, 2017.

Under the proposal, diagnostic tests that use NGS technologies are covered only in patients who have an
advanced cancer and for which the test is on-label and PMA approved by the FDA.

Medicare defines all other current and future uses of NGS testing in oncology as not medically reasonable and necessary.   However, NGS technologies that are (A) PMA tests used off label or (B) 510(k) cleared tests, can be used under a Coverage with Evidence Development paradigm.   If a diagnostic test is not PMA or 510(k), coverage is available only in NCI-sponsored trials.

The wide-ranging proposal would provide automated coverage for PMA NGS tests in patients with the on-label cancers.    However, it would open a very wide chasm between PMA-approved and other tests that are equally genetically accurate.

The NCD reflects a bold vision to push Medicare fee-for-service system, where most cancer care is provided, into a learning healthcare system, but the intensity of C.E.D as proposed may be unworkable.
There may be a host of unintended consequences of the draft language, which have taken time to discover.

·      *  BRCA risk testing in Medicare patients is always in women with a personal history of cancer, and normally done by NGS testing, but there is no germline PMA level risk test for BRCA in breast cancer patients.[i]
·       * If a test like the Oncotype DX test were converted to a faster, more accurate NGS format, it would lose LCD coverage because it would carry a complementary diagnostic and not PMA claim.
·       * The volume of patients diverted immediately in March into either FMI CDx testing or C.E.D. testing could swamp either system during 1H2018.

Stakeholders should comment carefully and with intensive and accurate citation to existing literature or other quantitative arguments.   One option for CMS is to close the final decision with coverage for PMA on-label testing, but initiate a multi-stakeholder dialog in 1H2018 (ACS, ASCO, AAMC, NIH, FDA, AHRQ, and others) to craft a more realistic way to bootstrap Medicare oncology into a learning healthcare system.