In August 2017, CDC released an 18 slide deck on US utilization of BRCA testing (through 2014).  Online here.   Around 2007, rates per 100,000 were twice as high in the Northeast as elsewhere although the difference has since narrowed.  The information also appears as a September publication in Genetics in Medicine, here. 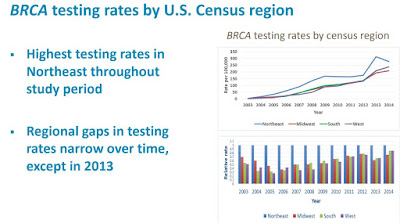 US PAMA data published by CMS on September 22 gives a less sophisticated but interesting snapshot of BRCA testing.   Labs reported to CMS they had about 100,000 payments for BRCA full sequencing in 1H2016, suggesting an annualized rate of about 200,00 per year.   The CMS PAMA data misses some labs (including hospital based labs and physician office labs) but might be a fairly good sample of large, independent BRCA-testing labs.   CMS itself pays for circa 20,000 BRCA full sequencing cases per year.