On November 17, 2017, after market close, CMS released the final PAMA fee schedule for 2018.   This is a new lab fee schedule based on market rates surveyed over the past year.

See all files online at CMS, here.   Note that the Excel spreadsheet is only PAMA-based prices (codes used in 2016 and priced based on 2016 data; no new 2017/2018 codes).    CMS issued a separate PDF of new crosswalk/gapfill prices.

CMS commented that it is still working on an ADLT application, which is overdue.

CMS handled 127 agenda items in the gapfill/crosswalk process.  This included new standard CPT coedes, new PLA codes, codes crosswalked in 2016 and re-crosswalked to the same values again due to a technicality, and codes lacking prices in the PAMA reporting process.

An unprecedented proportion of codes, 51/127, or almost half, had price changes between the proposed and final version.   This includes about 35 of the first 59 decisions (over half), which were on new or reconsidered codes.[*]

While only one or two codes were referred to "gapfill" in the initial proposals, [19 or 20] are referred to the contractor gapfill process in the final decision.   This includes several codes that seemed to almost spontaneously jump to gapfill, after CMS and panelists had already settled on a crosswalk.    In some cases this made a lot of sense; the "genome" sequencing code was proposed as a $600 crosswalk, even though the "exome" sequencing code had a PAMA price of about $3000.   In the final version, "genome" will be gapfilled. 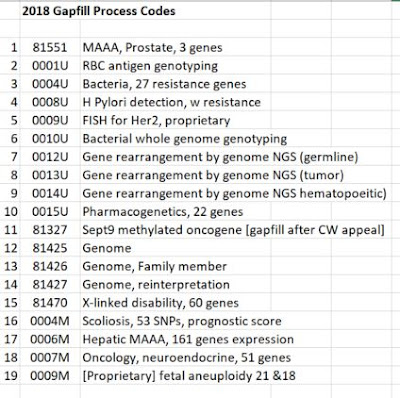 Several novel gene panel tests, such as for neuropathies, were crosswalked to the Lynch syndrome or colorectal gene panel test, 81435.  This is unfortunate as this code received an unbelievably low PAMA price of $38 (!), although it will only fall in 10% increments from the 2017 price of about $800.

CMS released a PDF with some comments on its PAMA policy (basically, nothing in the PAMA pricing files or medians changed.)   CMS recognized there were illogical outlieres, like 1 penny or $99,999, but did not discard these because they would have little impact on medians.   CMS discussed again its limited use of hospital reference lab data.

CMS dealt with a few odds-and-ends, such as special price rules when the NLA is 0 but some local fee schedules are grater than zero; and a few special statutory prices such as HA1c and Pap smears.   CMS corrected a few phase-in prices that were wrong due to "transcription errors."

The biggest announcement was that CMS will suspend its automated test panel aka clinical chemistry test panel rules effective January 1, 2018.   These rules forced payments for single analytes to always be lower than a corresponding panel.  Now, partial panels can receive a la carte stack prices that are higher than the panel the analytes are found on.   It would not be surprising to see a Congressional fix of 10 or 20 words to repair this, since it will cost CMS $50M or more per year (see here).  For example, 15-test-code 80053 is used about 30M times per year.   The panel payment will be $13, but any 14 analytes will add up to $75 at a la carte prices.  At the $13 rate, CMS payments will be around $380M, but if every doc prudently ordered a smaller, 14-analyte or "N-1" panel, CMS payments would be about $2.2B.   For every 1% of docs that orders the 14-analyte panel, CMS gives out $18M extra.