In 2016 and 2017, at the summer Clinical Laboratory Fee Schedule meetings, CMS discussed the impact of pending PAMA pricing law on its use of special "panel pricing policy" in clinical chemistry.  CMS has manualized policy (not statute or regulation) that caps the prices of analytes at no more than the price of a corresponding panel.   For example, if a 10-analyte panel is $20, and each analyte is individually $8, and you order 9 analytes, you might hope to be paid 9x$8 or $72, but CMS has special calculations that will cap your price at less the $20.   The CMS rules are complex, but that's enough to understand this article.

In August 2016, NILA and ACLA argued that CMS must discontinue panel pricing rules if and when PAMA sets the laboratory fee schedule in January 2018.  Rather, CMS must pay each code at the PAMA price.  While it may take courts and lawyers to decide, I think ACLA has a pretty good argument.

How much would this cost CMS?   I think there are two answers, one is calculable and one could only be guessed at.   We used 2016 utilization data, released recently by CMS. 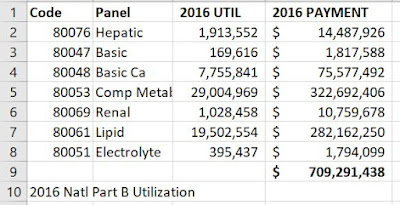 
But Don't Miss The Impossible to Exactly Predict Impact

Of course, despite the new incentive to submit "N-1" panels, labs in the US wouldn't submit all the panel tests at "N-1" a la carte prices.  So let's say this second effect is 10% of panels, or 10% of $700M, or about $70M.   The two effects together would tally about $110M.   Or more? [FN***]  All this offsets a substantial part of the several hundred million dollar savings caused by the rest of PAMA.

Point of Care Too

Another example is that today, if a point of care test company makes a kit that matches an existing ten test panel, a physician office lab will get about $20 from Medicare for it.  But if ACLA is correct that CMS must pay each analyte at its list price in 2018, if the device company makes an N-1 or nine-test panel, the physician might get, say, 9*$6 or $54 for that.

Excel for the above in the cloud, here. 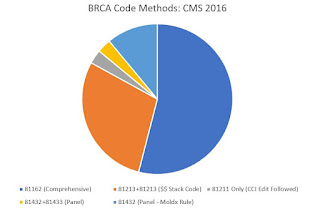 If ACLA is correct that lab tests must be paid at literal fee schedule prices under PAMA law in 2018, it could affect several MolDX local policies that variably act to upgrade and downgrade payments from fee schedule rates (here).

[FN *] Actual direct cash savings might be a bit less because some states pay a bit less than the fee schedule normal price.  However, I believe this is a small effect on a few codes in a few states, whereas the total affect is 50% over all codes and all states.

[FN **] Relative to 2016 fee schedule prices, in 2018, both panel and a la carte prices will typically drop 10%, but again, this is not a main driver of the large effect I'm discussing.  Note that 2018 utilization could probably be 10% higher than 2016 utilization.  I've used 2016 prices throughout the clinical chemistry section of this blog.

[FN ***] Hundred million dollar values aren't without precedent at all.  Recall that in 2014, CYP genetic testing shot up to $270M before being fought back down to only $25M in 2016.  CMS doesn't detect unprotected vulnerabilities quickly.   It has no current defenses against N-1 testing, because until December 31, they've paid 10% less, not 300% more.