Dating from the original benefit package in 1965 law, Medicare excludes nearly all services for dental, vision, or hearing.[*]  But there are some NEW efforts in 2017 to add these allied healthcare services to Medicare.

Authors from Johns Hopkins and the New York Academy of Medicine raise the topic in this week's JAMA (here).   They say that a benefit cost can't be quantified perfectly, but could be constrained as a $150 deductible, 20% cost share, and $1500 cap.  Such a benefit would cost about $2B  per year as a de novo Medicare benefit.  For perspective, Medicare is about a $600B program.  To provide the benefit at no government cost, it could be self funded by a $25/month premium.  Between those two options, you could have a self-insured program that is supplemented by low income premium support, at estimated at $1B government cost.   The authors describe several current legislative efforts. 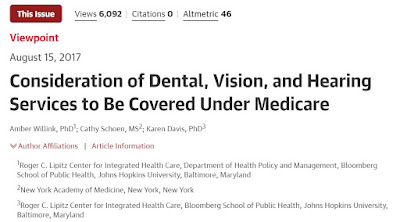 [*] There are some quirks.  The vision exclusion is for "refractions," though medical interventions like cataract surgery or glaucoma are certainly covered.  The hearing benefit excludes routine tests and hearing aids, but some implanted nerve based devices are covered as they have been ruled to not be "hearing aids" which are audio amplifiers with little speakers.  The dental benefit excludes services for "teeth and supporting structures" so both root canals and treatment for gingivitis are out, but medical conditions in the mouth like tongue cancer or broken jaw are covered.