The Impact of PAMA on Molecular Codes Currently Unpriced by CMS

Since the new molecular coding system was introduced in 2013, CMS has priced each year's new codes by the crosswalk or gapfill method.  However, until 2016, CMS left many of the molecular codes unpriced.

Beginning in 2016, CMS began a new policy of pricing every new molecular CPT code, whether it was used by Medicare or not.  For example, the genetic code for Ashkenazi carrier screening was priced by CMS at about $600 (81412) in 2016.  What data CMS used to set this price is unknown (it was gapfilled, so only a gapfill price result exists).

PAMA requires labs to submit commercial pricing data to CMS in 1H2017 (for tests performed in 1H2016), and CMS is to calculate median prices per test to reset its national fee schedule in 2018.  While this process is running late, and might stall-out altogether, it's interesting to note that it would convert a bevy of legacy unpriced codes to priced codes.


For example, CMS never nationally priced the 500-odd genes that are lumped into the AMA CPT "Tier 2" coding system.  CMS never priced common and economically important gene tests such as partial to complete cystic fibrosis sequencing (81220-24), or increasing important codes like that for tumor gene panel testing, 51 or more genes (81455).   All of these codesare found in the PAMA code collection file (here - see file "Applicable information HCPCS codes.")  In total, nearly 100 codes currently unpriced by CMS will get first-time CMS pricing via PAMA.

Based on CMS data, Tier 2 codes are collectively 5-10% of molecular test codes.  While there are no national prices, MolDX covers about 50 of the 500 genes in the Tier 2 cystic, and provides individual gene prices for the genes it covers, rather than a category price for each Tier 2 code.  (See figure below; cloud data here).

Assuming Tier 2 codes are nationally priced in 2018, MolDX will have to decide whether to settle for category-level pricing, or to continue gene-specific pricing by tossing all these tests into an unlisted code managed by secondary Z code claims processing.   If MolDX were to do the latter, it would further reduce the granularity of national databases for CMS claims, because even more claims would disappear into the 81479 unlisted code making that code larger and larger.  (In 2015, CMS molecular unlisted code use was 35% per year and rising - here).

Another route to that result would be if MolDX continues to apply its rule that "any claim with 2 or more genetic tests becomes a panel," to be submitted with an unlisted code 81479 and a Z code.   Since it's increasingly rare that genetic tests occur at only 1 per patient, fewer and fewer claims under the large MolDX policy system would show specific CPT codes in national databases since the claims would be viewed as "panel" of 2 or more genes.  [The MolDX concept that 2 or more genes constitute a panel for coding purposes is inconsistent with AMA CPT Coding Assistant guidance in August 2016, which instructed that all CPT-coded genes (or Tier 2 codes) should be individually listed on claims, and in Tier 2 multiples when needed.] 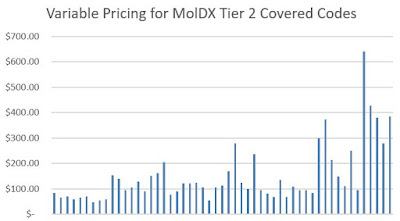 However, as reported in the November 2016 Dark Report, using data from Xifin, there was considerable noise between CMS molecular fee schedules and current market prices, as far as could be determined by Xifin's large customer database.   That is, for a particular CMS code and price, the market price could be half as high, twice as high, or somewhere in between.   However, only 2 of 15 tests were significantly lower than CMS, and only a few of 15 were substantially higher   On average, CMS pricing likely has some impact, with market pricing of about half of genes falling within a narrow band near the CMS prices. 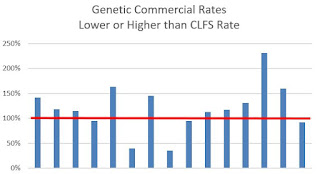