The Downing Report, 2017: Innovation at HHS

Gregory Downing, Executive Director for Innovation at HHS, which an early proponent of of precision medicine in the mid-2000s at HHS, researching and calling for more coordination among NIH, CMS, FDA, and other parts of HHS and the government.  Since then, he has had a broader mandate for HHS innovation initiatives.

On January 15, 2017, Downing released a 63-page Innovation Report, along with a blog that frames its genesis and purpose.

The report has six sections:

As an Appendix, there are a couple dozen references cited (including books by Harvard's Clayton Christensen) and several dozen interviewees are listed. 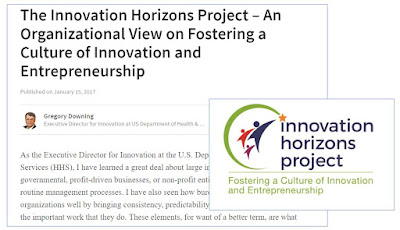 The blog has a mid-January date; the PDF itself has a publication date of October, 2016.   The publication notes it is the result of research conducted "as part of official duties," but not an official view of HHS.

The Executive Summary is clipped here.

The report was produced under the auspices of the HHS Chief Technology Officer, and Downing thanks the successive officeholders:  Todd Park, Bryan Sivak, and Susannah Fox.   After serving as the CTO 2009-2014, Park served as an SF-based "Technology Advisor to the White House."   Sivak's Linked-In lists his role as CTO as 2012-2015, followed by Entrepreneur in Residence at Robert Wood Johnson Foundation and Co-Founder of RS Partners in Washington ("partner with companies that are fundamentally changing healthcare.")   Susannah Fox served as CTO from 2015-January 2017.  She was previously an editor at USNews, and Associate Director at the Pew Research Center, where she led the Pew Internet Health Portfolio 2000-2014.
____

A few weeks ago, CMS-CMMI released its third biennial innovation report to the Hill, here.