In the press this week, Silicon Valley alumni of Google and Uber have claimed to create a new-generation doctor's office that will have a transformative effect on office visits.   The service is premiering under the brand, "Forward." 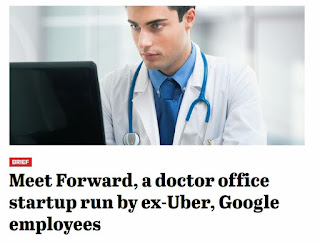 See coverage at Business Insider, here. and at DiveHealthcare, here.  At TechCrunch, here.  (A critical article about Forward appeared at MedCityNews, here.)

The attention to primary care - not just the fast-lane buzz of telemedicine- is rising.   For six examples:

In the TechCrunch article, it sounds like one emphasis will be speed - point of care and point of action.   Founder Adrian Aoun remarks:
Also according to TechCrunch, investors include Khosla Ventures, Founders Fund, John Doerr, and angels included Eric Schmidt and Marc Benioff.

A comparison was made to One Medical, a multi-city branding and appointment entity for primary care (here).  One Medical states: "Our healthcare providers are rated in the top 10% on Yelp, see 35% fewer patients than typical providers, and 95% of our appointments start on time."

For the publicly-streamed Molina presentation at JP Morgan, January 2017, here.