From 2010-2016, the FDA active promoted an evolving plan to regulate LDTs nationally.   In 2014, it released a detailed roadmap for LDT regulation, for public comment.   Shortly after the election, November 18, FDA announced it was deferring its LDT regulation plan.


The document is styled as a "discussion paper" and likely captures some of the learnings and changes in plan that occurred inside the FDA between the 2014 draft guidance and the writing of a final guidance that has been deep-sixed. 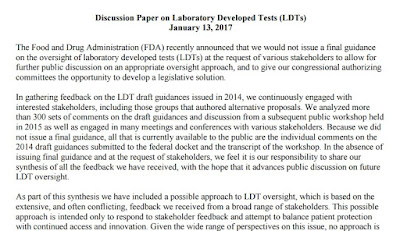