Candidates for Head of NIH and Head of FDA

The current head of NIH, Francis Collins, has been widely popular and many are advocating that he be kept in position under the Trump administration.

However, other names are being floated as head of NIH.   On January 13, 2017, Nature's headline is:  "Surprising contenders emerge for NIH's Trump Chief;" see the online article here. 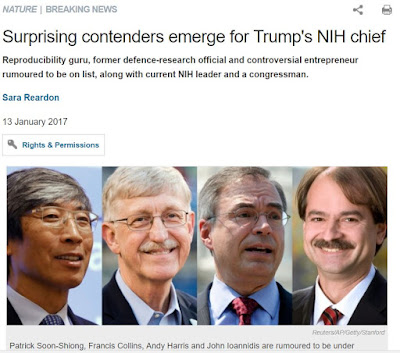 More after the break, including coverage of FDA candidates.

According to Nature, Francis Collins has had what is essentially a job interview for retaining his position; and Congressman Andy Harris of Maryland has been interviewed as well.  Harris was active on the 21st Century Cures legislation; he opposes abortion and research on marijuana.  For a December 1 article on Harris, here.

According to Nature, biotech billionaire and physician-scientist Patrick Soon-Shiong has also met with Trump regarding the NIH position.

In an update on STAT on January 24, it was reported Soon-Shiong has had not one but "several meetings" with Trump over national health policy in January (here).

Finally, Nature mentions other candidates who are being rumored as possibilities, but haven't necessarily been interviewed.  These include evidence-based-medicine guru at Stanford, John Ioannidis, and Geoffrey Ling, a retired Army neurosurgeon who directed biotechnology at DARPA.

FierceBiotech has a January 14 article focusing on Soon-Shiong, here.  Soon-Shiong was a very early proponent of the  Cancer Moonshot cancer program and met with Trump in mid-November (here).

Leaving aside NIH candidates, for FDA, candidates (see Fierce Biotech article here) have included investor Jim O'Neill and Balaji Srinivasan, CEO of a bitcoin startup called 21.co.   O'Neill has advocated more libertarian views on FDA (e.g. release drugs and products and let markets decide.)   Srinivasan, via tweets and other media, has vocalized concerns that FDA doesn't fully weigh the harms of slow drug approvals when it weighs the risks that might occur if a drug is approved.  (In my own words, I think this means, we might have 1000 lives saved by slow and cautious approvals, balanced by 100,000 lives saved during the time created by faster approvals.) 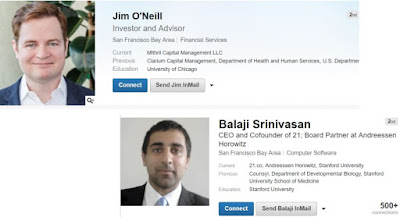 O'Neill and Srinivasan are both well-known to Trump advisor Peter Thiel.

In December, I saw  Scott Gottlieb, a physician who has notable policy credentials and strong conservative credits, as an early front-runner for the FDA position.  A conservative blogger wrote "Gottlieb for FDA" on January 15 (here).   The influential journal National Law Review ran an article on January 20, "How Will Trump Change the FDA," focusing almost entirely on Gottlieb's positions (here).  Despite the generic headline, the article cites Gottlieb by name 19 times.

In a Bloomberg article, drugmakers argued that the FDA chief should have clinical experience, here.
_____

Footnote
It wouldn't be impossible for Administrator Robert Califf to stay on, being confirmed just 11 months ago by a Republican Senate.  Califf left his post just before the Inauguration.