On the afternoon of January 4, news broke that in a few days Craig Venter will step down as CEO of Human Longevity.  Article at MedCityNews, here. 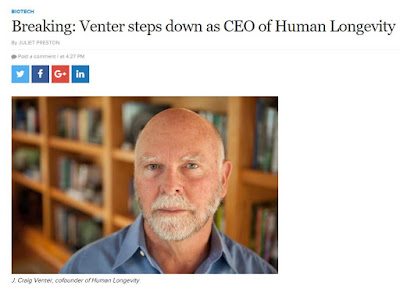 The new CEO will be Cynthia Collins, from GE Healthcare.  Collins hold a BS in microbiology and an MBA from University of Chicago; she's worked successively at Abbott, Baxter, Sequoia Pharmaceuticals, Beckman Coulter, GenVec, and GE Healthcare for IVD research and applied markets.

Venter is one of the most accomplished and well-known living biologists.  HLI completed $220M in Series B fundraising in April 2016.   On a personal note, my career in consulting began in October 2001, when Accenture assigned me (as a physician with a fresh MBA) to a strategy team working at Venter's company Celera in Maryland.   Fifteen years later, I'm still doing strategy consulting in genomics!