On December 23, the New York Times ran a story on the Medicare payments for a fairly costly drug, Acthar.   The story was triggered by a Hill report on "Sudden Price Spikes in Off Patent Prescription Drugs;" see the Hill 130-page report here, and representative stories here (at USA Today) or here (at Endpoints industry blog). 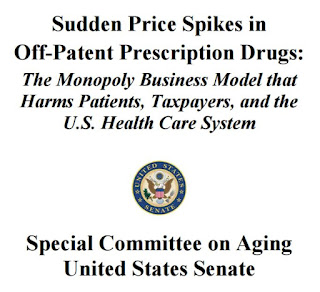 The NY Times story contains some errors that can't be ascribed simply to journalistic brevity.  To bring more clarity to the actual policy levers on Acthar, this blog provides some background.  More after the break.


Taxpayers are paying the Acthar freight to a greater degree than private insurers. While Aetna, Cigna and UnitedHealthcare have restricted reimbursement on Acthar in recent years, Medicare continues to pay, no questions asked [sic].
That’s because the Center for Medicare and Medicaid Services, a unit of the Health and Human Services Department, provides reimbursement for any medication determined to be a covered Medicare Part D drug [sic]. Acthar meets that criteria.   Other insurers aren’t so lax.

First, it's not true that Acthar is always a Part D drug; certainly not true that Part D has no controls over drug spending and use; and where Acthar is a "Part B" drug, there are indeed some publicly available Medicare policy controls on its use.

The overall general messaging may be correct, but the facts should matter.

Acthar payments are usually made in Medicare Part D, so we'll tackle that first.  When Acthar is used by patients at home, Part D would cover the drug.  Patients will have variable copays based on their Part D plan, and the commercially run for profit Part D plan will endeavor to buy Acthar at the lowest possible price.

It is not true that Part D plans have no control over drug utilization.

These drug plans can have a substantial range of preauthorization or utilization review procedures, and indeed, they are incented to do so as long as "medically necessary" care is not denied.

Some of the numerous officially endorsed utilization review policies available to Part D plans are listed, in detail, in a publicly-available government manual (here).[*]


Part B versus Part D Drugs

Generally, Medicare has always paid for physician-injected drugs (including chemotherapy) as services incident-to a physician and therefore payable by traditional Medicare, Medicare Part B.  However, based on statute and regulation, Medicare excludes injectable drugs that are "usually self administered" such as insulin.  The policy is found in the Medicare Benefit Policy Manual, Chapter 15, Section 50 (here).

The simplest way to understand Medicare's approach is to assume that any injectable drug is potentially covered by Medicare Part B (such as when administered by physician), but thereafter, Medicare contractors make determinations of which drugs are "usually self administered" and post them for the public on the internet.

By searching for the Acthar code (J0800) in the  online Medicare Coverage Database, Acthar/J0800 appears to be listed by three of ten Medicare contractors as self-administered: Noridian, Palmetto, and WPS.

In western US states under Noridian, in several midwestern states under WPS, and in several mid-Atlantic states under Palmetto, Acthar is classified by Medicare "usually self administered" and (like for insulin) claims originating from physician offices will be autodenied.   Given this regional autodenial status for the Acthar drug code, there is no reason for these contractors to have policies about the Part B payment for Acthar/J0800.

In other states, assuming Acthar is "not" on the self-administered drug exclusion list, claims for Part B use of Acthar would be paid.  One contractor, "FCSO," which handles Florida, has a policy that limits payment for Acthar to specific clinical situations (policy L33811, here.)

This Medicare policy is fairly critical of Acthar, writing:


Corticotropin (adrenocorticotropic hormone (Acthar, ACTH), is a normal by-product of the anterior pituitary gland which acts by controlling the secretion of the adrenal hormone, cortisol. It is used for limited therapeutic purposes...Corticotropin has limited therapeutic value in conditions responsive to corticosteroid therapy; in such cases corticosteroid therapy is the treatment of choice.

Medicare Payment under Part B

Where Medicare pays for Acthar under Part B, it pays by 106% of the average sales price or ASP as reported by the manufacturer on a quarterly basis.   These are available in public tables (here).  Mallinckrodt AActhar is the only drug brand or form listed as being processed and priced under the code J0800 (NCD drug code 63004-8710-01).

When this code is submitted in a state that does not place Acthar on its Part B exclusion list, Part B will pay $3636/40 units:

Acthar Should Be on All, not Some, Part B Self Administered Drug Exclusion Lists

Virtually no Medicare Part B payments were for Acthar, only $82,273 in CY2015 (and nationwide, it's a billion dollar drug, here.)

This suggests that Acthar/J0800 is clearly used "less than half the time" in the office setting, and if Medicare law and policy were applied uniformly, it should probably be on the self-administered-drug exclusion files of Medicare Part B in all states.  It's hard to understand why it's not (e.g. here).

For a 2014 NYT article on Medicare and Acthar, here.

[*]  Medicare Part D plans are also expected to respect the USP Medicare Model Formulary or to produce comparable formularies.  This includes covering all drugs in a few protected classes (where it is presumed by policy that switching is difficult) and coverage of at least some drugs in all the other categories and classes.   Relevant categories or classes including pituitary hormonal agents (e.g. somatotrophin and desmopressin), adrenal hormonal agents (e.g. cortisone, corticotropin [ACTH], dexamethasone), and there is a category for anti-inflammatory agents (defined simply as steroidal vs nonsteroidal.)