Will Chemotherapy Biomarkers Remain the Wallflowers of Personalized Medicine?

Recently, I've heard several different sources emphasize that chemotherapy biomarkers (for platinum drugs, taxanes, etc) would have enormous impact on cancer care if such biomarkers could be validated for impact and become reliable enough.   Several skeptical articles on precision oncology (here) have noted that only a relatively small proportion of, for example, lung cancer patients are eligible for targeted therapies.  For example, 10-15% have EGFR-related mutations, another 3-5% have ALK-related mutations, leaving a quite large proportion of cases in the world of traditional chemotherapy.

In the November issue of Annals of Oncology, Olaussen and Postel-Vinay of INSERM review the landscape for chemotherapy biomarkers.  Their 12-page article is open access (here).

After discussing some ten chemotherapy biomarkers, across some 126 journal citations, they conclude, "none of these biomarkers has till now been validated [prospectively]...none of them is currently ready for implementation in routine clinical practice."   Nonetheless, the eventual returns could be big.  More after the break.

The authors use the terminology CCC, conventional cytotoxic chemotherapy.   Drugs in these classes, like pemetrexed, cisplatinum, doxorubicine, vinblastine, and others, have diverse entry points in the metabolic and mitotic cycles: 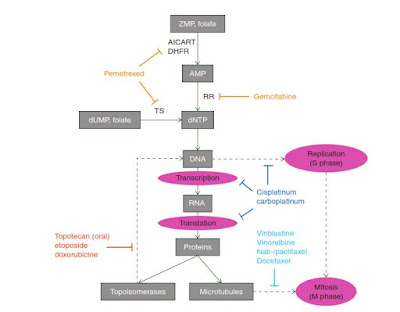 Biomarkers under study have included, but not limited to, ERCC1, RRM1, TS, hENT1, Class III beta-tubulin, TOP2A,  CEP17, and others.


Contrary to targeted therapies, CCC is unfortunately still used in a historical ‘one-size ﬁts all’ approach, which is clearly suboptimal. Although several predictive biomarkers for CCC efﬁcacy have been explored, none of them has gone through clinical implementation for routine daily practice, and predictive biomarkers or molecular tools designed to customise CCC to the patient’s tumour molecular proﬁle are crucially lacking.
Such biomarkers would not only help identifying chemosensitive patients and selecting appropriate drug combinations upfront, but it would also avoid useless toxicities, decrease overall costs, and eventually improve patient outcome.
Noteworthy, the remarkable failure rate in the development of biomarkers predicting CCC efﬁcacy reﬂects how challenging this task is.....The difficulty and potential lack of motivation of most drug companies, and academics, to work on CCC biomarker development is well illustrated by the low number of clinical trials currently investigating such biomarkers (Table).

They provide a table of ongoing studies (click to enlarge; this list of studies is short relative to the "1000s" of oncology clinical trials): 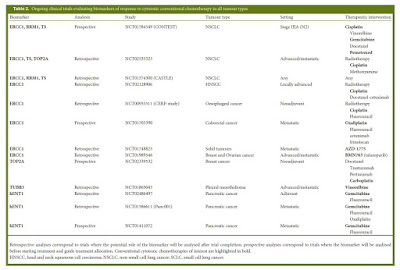 
In conclusion, despite the absence of validated predictive biomarker for CCC customisation, novel technological advances open encouraging perspectives for performing analytical validation of some promising candidates that have been identiﬁed so far, or for developing novel types of predictive biomarkers—such as DNA signatures.
Most importantly, patients are eager to know as much as possible about their tumour and to beneﬁt from a customised treatment, even within the frame of an exploratory clinical trial. Clinicians and academic researchers should therefore be committed to pursue investigations in this ﬁeld.

A number of the "CCC" biomarkers have been studied in variable immunohistochemistry formats for protein detection, as well as genomics.   Paraffin-based proteomics may also be a possibility, according to NantHealth, which has a market cap of $1.5B to put behind its areas of interest.  At the June 2016 ASCO meeting, NantHealth launched its "GPS Cancer" DNA/RNA/proteomic panel (genomic-proteomic spectrometry), describing it as the "first cancer to to better inform chemotherapy choice with quantitative measurement of...protein biomarkers."  Another press release remarks, " GPS Cancer enables protein detection from paraffin embedded tumor tissue (“liquid tissue”) at an extremely low level of detection (atomols per microgram of tissue) and thereby enables personalized GPS guided therapy for treatment decisions involving chemotherapy." (Here; see also their November 2016 press release, here.)