The CMS 12-page PDF is online here.  More after the break.

(1) Prices appealed from last fall's crosswalk final prices.   Such crosswalk pricing appeals were made around December 2016, roll into the next summer (July 2016), with final decision in mid November, as shown here.

(2) Prices are published for brand new 1/1/2017 CPT codes, if crosswalked.  If the code is to be gapfilled rather than crosswalked in CY2017, that was announced now, rather than a price.

(3) Changes, if any, to MAC Gapfill Prices that were announced around October 1.  This would be due to internal administrative appeals that do not have a public record.   Raised prices for a number of sole source MAAA tests were just published.

Regarding (3).  A number of sole source MAAA companies were markedly lowball priced in June (initial MAC prices) with some increases over the summer that appeared when the final MAC prices were published by CMS around October 1.   Yet again, some of these companies have proved successful in a further administrative appeal to CMS, conducted over the last several weeks.  These administratively decided upgrades from "final MAC gapfill" prices posted in early fall are shown in this table (click to enlarge): 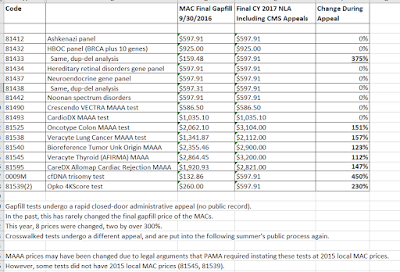 For my PDF memo on what happened in this year's crosswalk/gapfill process, in the cloud here.