Comments Are In: CMS Asks Public About MAC Contracting

In total, 23 comments were submitted (here).  Details after the break.

The Association for Molecular Pathology (AMP) submitted one of the longer comments, at six pages; see it here.   AMP emphasized that (1) CMS should oversee the work of MACs and do so in a timely manner, and (2) MACs should be assessed (aka hired, fired?) based on their transparency and public engagement.  For example, MACs should also be metric'ed based on the transparency of their gapfill decisions.  CMS should not consolidate lab coverage under one MAC.


The importance of a multiple‐MAC system has been made abundantly clear to AMP during the course of our work responding to draft local coverage determinations. Though some MACs release similar draft coverage determinations for a test, they often individually respond to AMP’s presentation of scientific data in different manners. For example, AMP has had very different experiences working with Palmetto GBA and with National Government Services (NGS) in finalizing coverage determinations for Non‐Small Cell Lung Cancer testing in their various jurisdictions. NGS worked closely and transparently with AMP members, and their final policy was informed by input and support from labs in their jurisdiction. During these interactions, NGS served as the “primary operational contact” between CMS and providers in the NGS jurisdiction, fulfilling their obligations as a MAC. AMP has firsthand experience working with MACs which are less than successful at serving as operational contacts and at bridging the gap between the payer and provider community. Relying on one MAC would limit patient and provider opportunities to engage.


The College of American Pathologists (CAP) submitted a 3 page comment, here.   CAP raises concerns the LCD process is opaque and slow, and is opposed to "carbon copy" LCDs as well as MACs taking on "responsibilities such as attempting to determine the validity of laboratory testing [which is] already provided for under CLIA."  CAP also calls the gapfill process "opaque" and "exceedingly difficult" to work with.  CAP is opposed to MACs having lab policies which they did not develop, as the MAC finds itself "hamstrung attempting to respond to stakeholder comments for an LCD authored by another MAC...a process that obviates meaningful stakeholder exchanges...[the MAC's LCD becoming] a fait accompli." 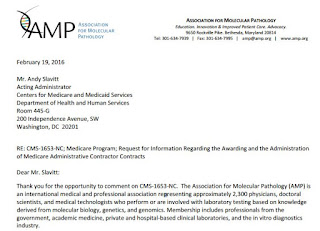 Note that while these parties vocally emphasize the need for "local" MAC LCDs under "local" comment and revision, as recently as January 2014, the OIG has sharply criticized CMS for inconsistent LCDs in a 23 page report.

The OIG report on LCD inconsistencies is online here. 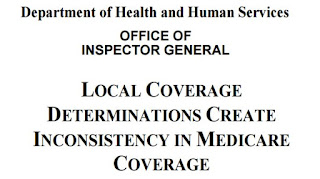