On April 19, 2016, the San Francisco genetics company Invitae announced that it was being covered for the hereditary breast and colon cancer code 81432 at $622.   This payment comes from the Jurisdiction E contractor, Noridian, but presumably reflects pricing that will apply through the 24-state MolDX policy system (here).   Code 81432 is defined as BRCA1 and BRCA2, full sequencing, plus 12 or more additional hereditary breast cancer related genes.  More details after the break.

A few weeks ago, MolDX announced it would cover one-shot panel based Lynch syndrome sequencing (here).   Until that announcement, MolDX only covered Lynch genes one by one in a detailed step by step process laid out in an LCD.   This suggests payers are moving toward panel coverage at new panel prices, at least for well-characterized syndromes.  MolDX has relatively complex positioning on the use of coding for NGS testing, as mentioned in the Invitae press release (the MolDX next gene policy coding article, now in V2, is here.)

Sometime during March or April or May 2016 - a three month window of which six weeks are now behind us - CMS will post a listing of all MAC proposed prices for all new 2016 genomic CPT codes that weren't priced by CMS's administrative process last summer and fall.

Note that while MolDX pays $622 for 81432, there is a sister code, 81433, for the same gene series with added Dup Del analysis (e.g. an add-on code).  MolDX does not recognize the use of this code, as indicated by its placement on the MolDX non-covered test spreadsheet, last updated April 6, 2016. 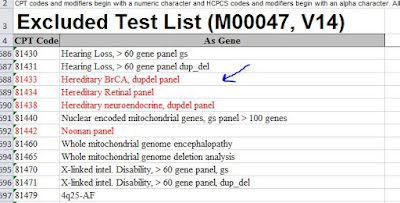